This post may in some ways alleviate or abrogate or some other appropriate verb beginning in "a" the debt I owe our undead brethren and, to some extent, my fellow bloggers.

I utterly failed to fulfill the goals of Zomtober this year, despite my stated intent to participate and its amazingly low bar to be dubbed a participant -- paint four zombies or survivors during the month, debuting them on each Sunday of the month. Despite the great organizational and promotional efforts of the Eclectic Gentleman Tabletop Gamer, I blew it. I painted zilch. Zero. The only zombie-related activity I had during the month was posting my (still popular) unboxing of Wave 2 of the Zombicide Kickstarter. See that post here.

So now I've got Wave 2 of Brian Roe's Zombie Plague Kickstarter minis. (See the post about Wave 1, the survivors, here.) With Wave 1 I also picked up the new comic release that includes the latest version of the Zombie Plague rules.

Wave 2 comprises solely zombies and some themed resin bases. Unlike the earlier survivor minis, these zombies don't depict particular characters or creatures from the comic storyline.

As big a fan as I am of the pop-culture representations that have become commonplace in current zombie products (Zombicide, I'm looking at you!), I have to say that I find these original creations even more inspiring. And as I am a fan of so many retro things (7TV's '70s vibe, Atomic Cafe's skewed 1950s post-nuclear landscape), I find this '50s-looking bombshell called "Dead Sexy" to cause my chilled heart to beat just a little faster. She's a perfect realization of the concept art, and the casting is nice and clean. She has such personality (and sex appeal) that I may have to find a role for her as a "smart zombie," or some kind of unit leader for the undead. I can't decide whether she died in the Fifties and was just revived or if she dresses like she's into '50s car and Tiki culture and was caught up in the zombie apocalypse. Either way, she sports minimal injuries to her curvy form -- dead sexy indeed.

On all these minis there was some minor flash, most of which I was able to clear away with just my fingers. Some mold lines are visible but are so mild that I can't really differentiate them by touch. This should bode well for cleanup -- a quick swipe with a file and we're ready to rock. 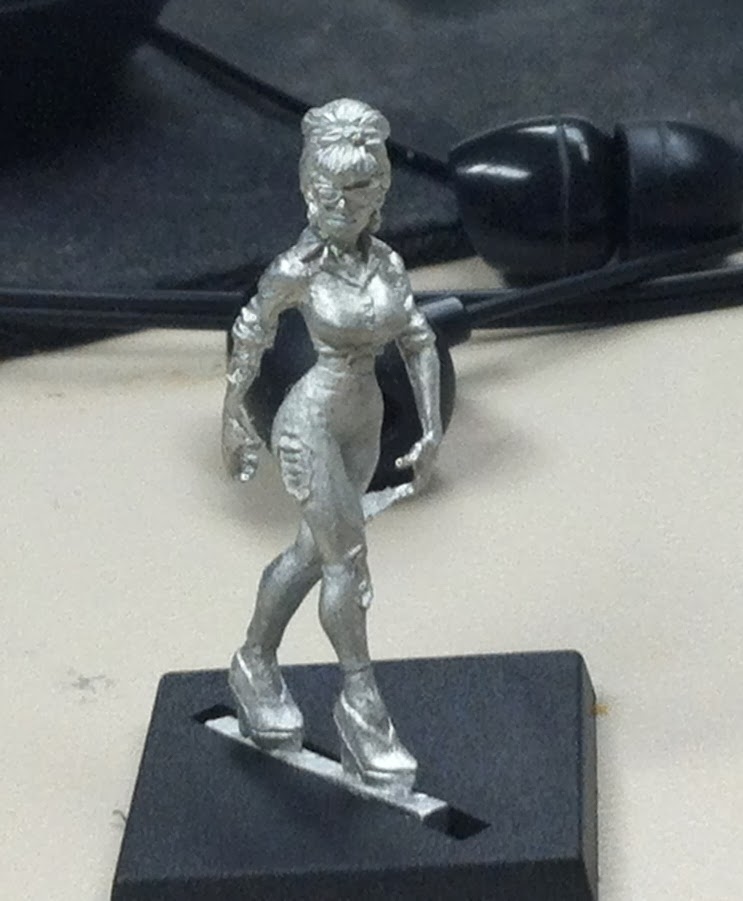 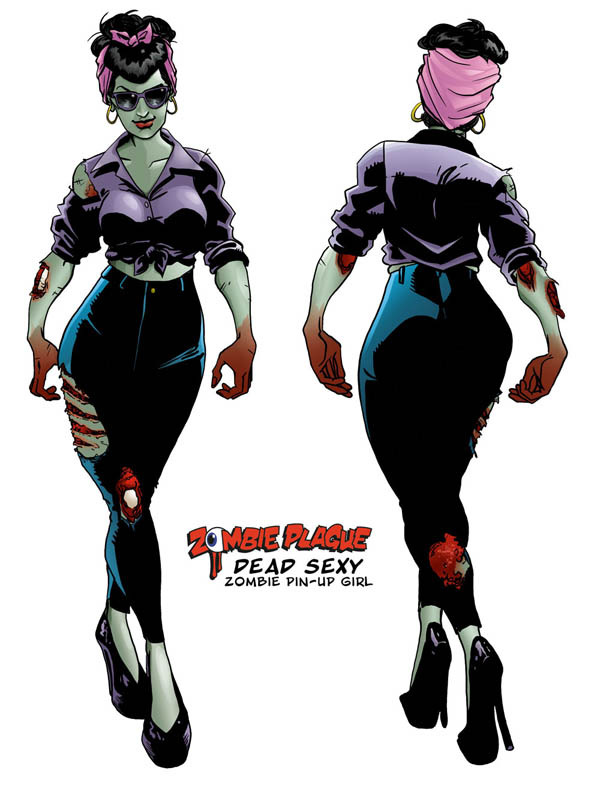 Below we have Dirt Nap, captured in the act of emerging from the loose loam of his own freshly dug grave. I believe it to be a makeshift grave, too, as he's accompanied by a garden gnome. I wonder if this man's wife did away with him and planted him in the yard under her begonias, only to have her dispatched husband return, now perhaps to wreak his revenge? (Why am I hearing the sentence in Jonathan Ross' voice? "... weturn, now perhaps to week his wevenge?")

Forgive the intrusion of my Blu-Tack in the photo below, but it was the only way to get him to stand up long enough for this photo. The recesses on the custom base are well done and will work perfectly once the mini is actually glued in. Gotta wait until I clean him up, though. The little gnome is a hoot, too (and there's a spot for him over the zombie's right shoulder, but I couldn't get him to stand there. Uncooperative little gremlin. Uncooperative Blu-Tack too.) 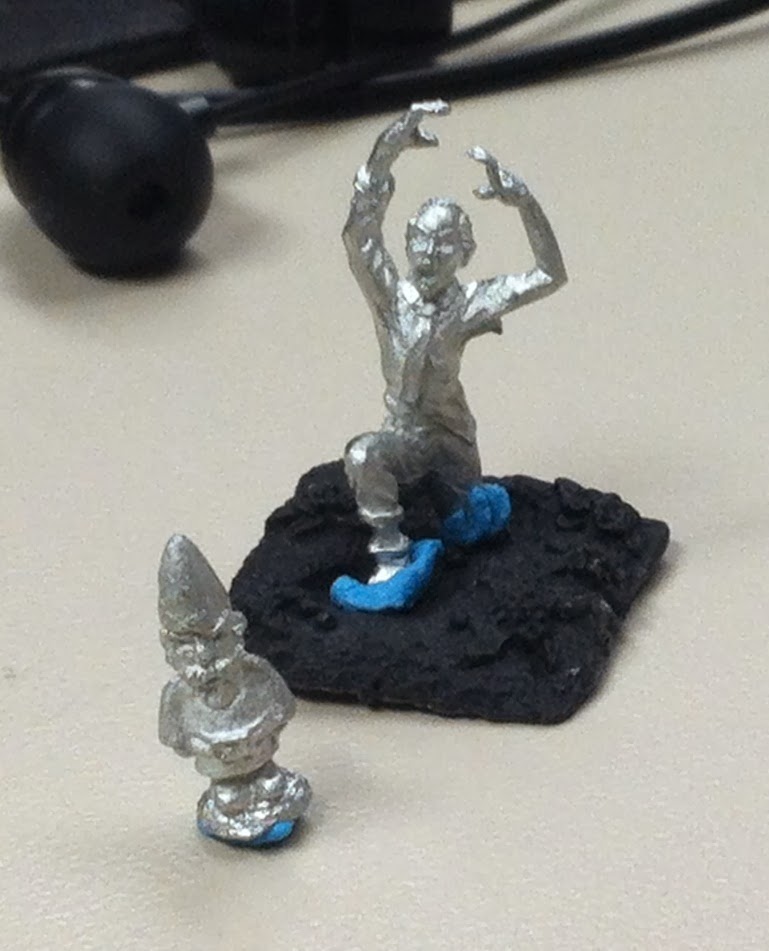 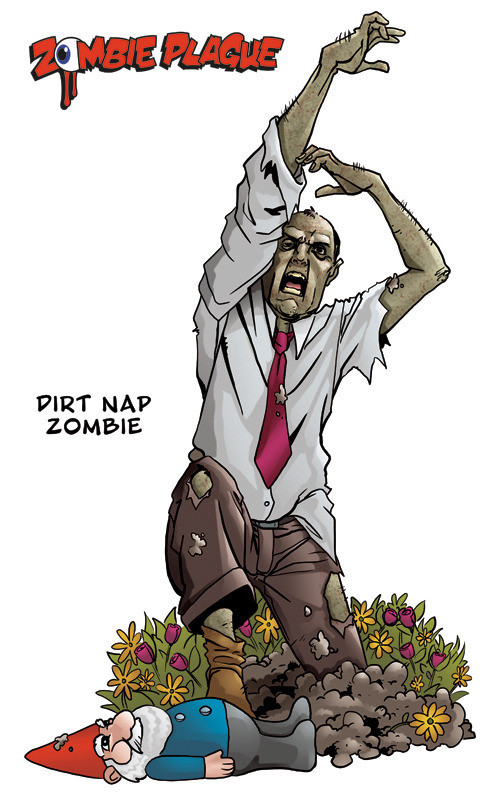 Sorry for the blurry photo below, but it was the only one I captured of the multipart Joe Zombie. You can check the Updates in the Kickstarter project to see a couple of different ways he can be assembled. I think he's a stroke of genius. There are popular plastic zombie sets out there, but having that kind of choice for a metal model fills my with delicious dread. And I can always find good use for some extra arms and heads. My only regret is that I didn't order more of him. He is a great example of the miniature-maker's art and will make a great addition to any wargames table that needs a modern zombie. All hail the Roebeast, harbinger of the Zombocalypse! 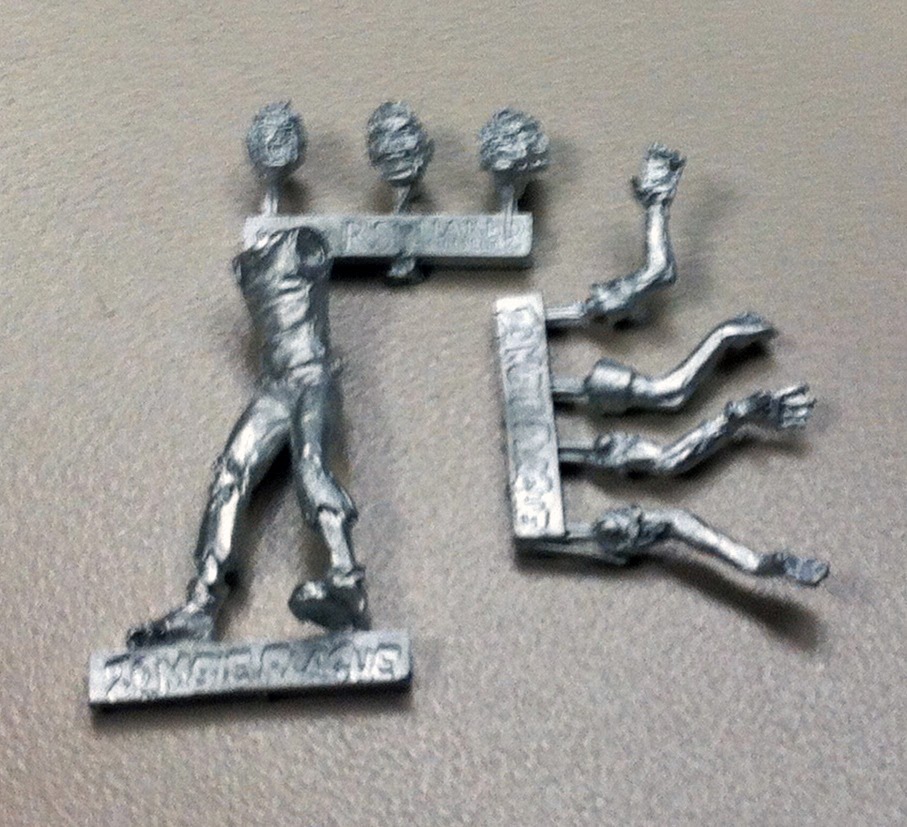 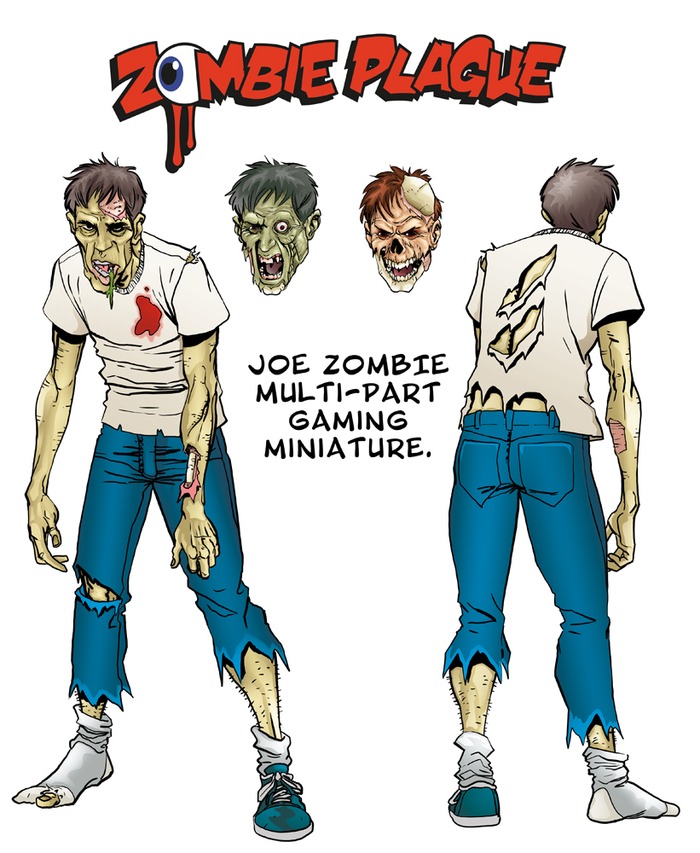 And below we have the multipart female zombie, Rose Frum. (Took me a few minutes to get the pun. I know, sometimes I overthink things. Love it!) Rose is a little more hunched than Joe but has the same great choices for arms and heads. Her body's showing more damage than Dead Sexy, and her choices of heads span the gamut from vacant-eyed undead girl to meatbag corpse. We've also got a sprue (Is it still a sprue if it's metal?) of extra weapons -- the weapons wielded by the survivors, to boot. They are, as with all these, precise, clean, clear, direct and delicious. 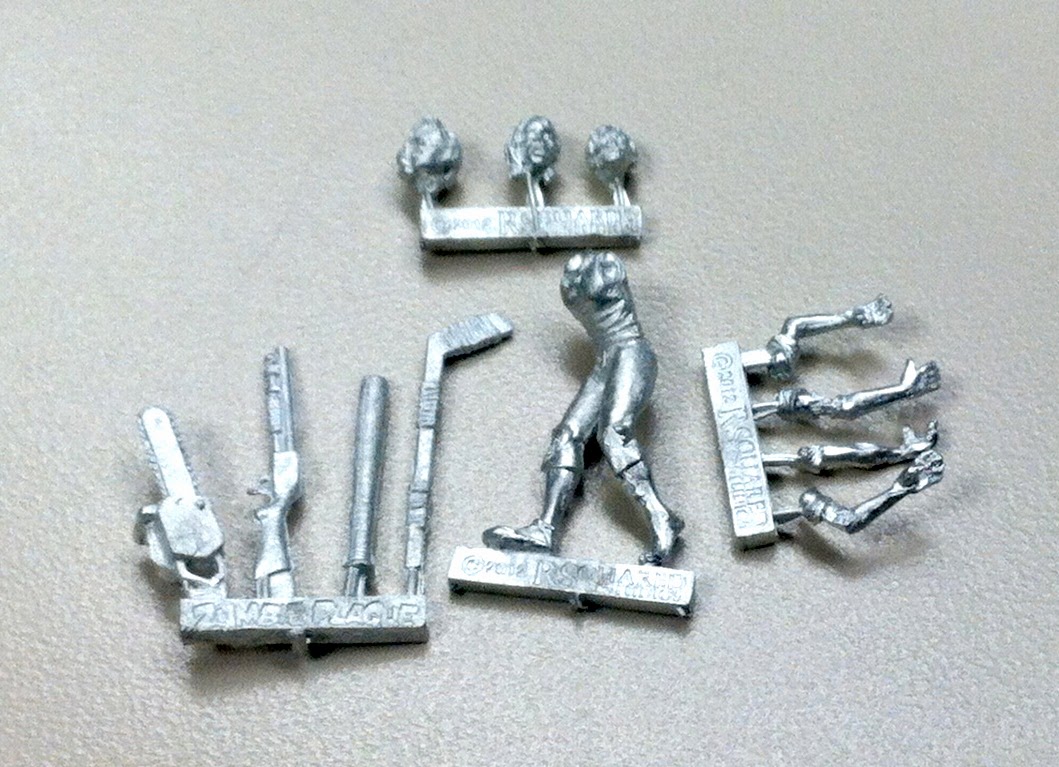 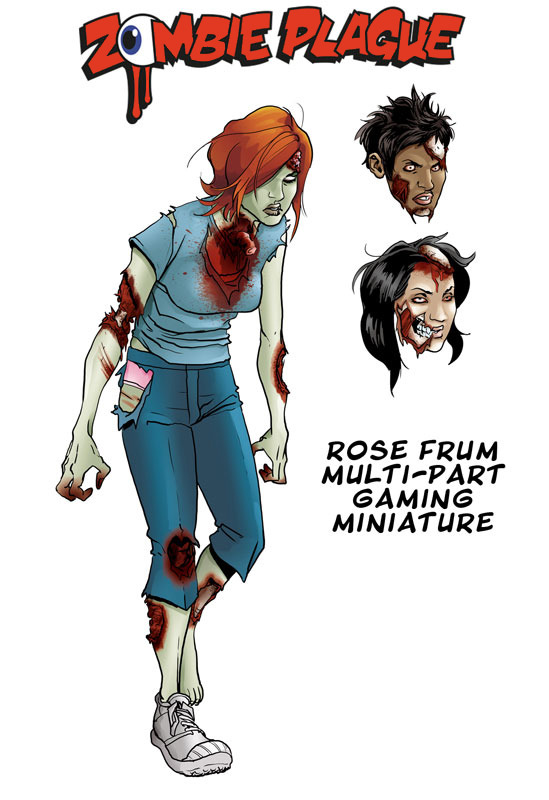 And here's the zombie Brian calls Tubby. Her corpse is what cops would call a "floater," someone whose corpse was immersed in water after death and now features bloated flesh and sloughing skin. The presence of a bikini bottom makes me think she was in a lake or river rather than in an actual tub, but maybe she bathes in her underwear, who knows? Her sculpt again does a great job of capturing the putrescence present in the concept art.

And may I say I really appreciate the effort that Brian went to here with women that look like real women, not the siliconed-out supermodels we often see depicted in fantasy minis. Admittedly, these women are dead -- or rather, undead -- but they're amazingly realistically proportioned, which is, sadly, not the norm in the gaming industry. Kudos, Rsquared! 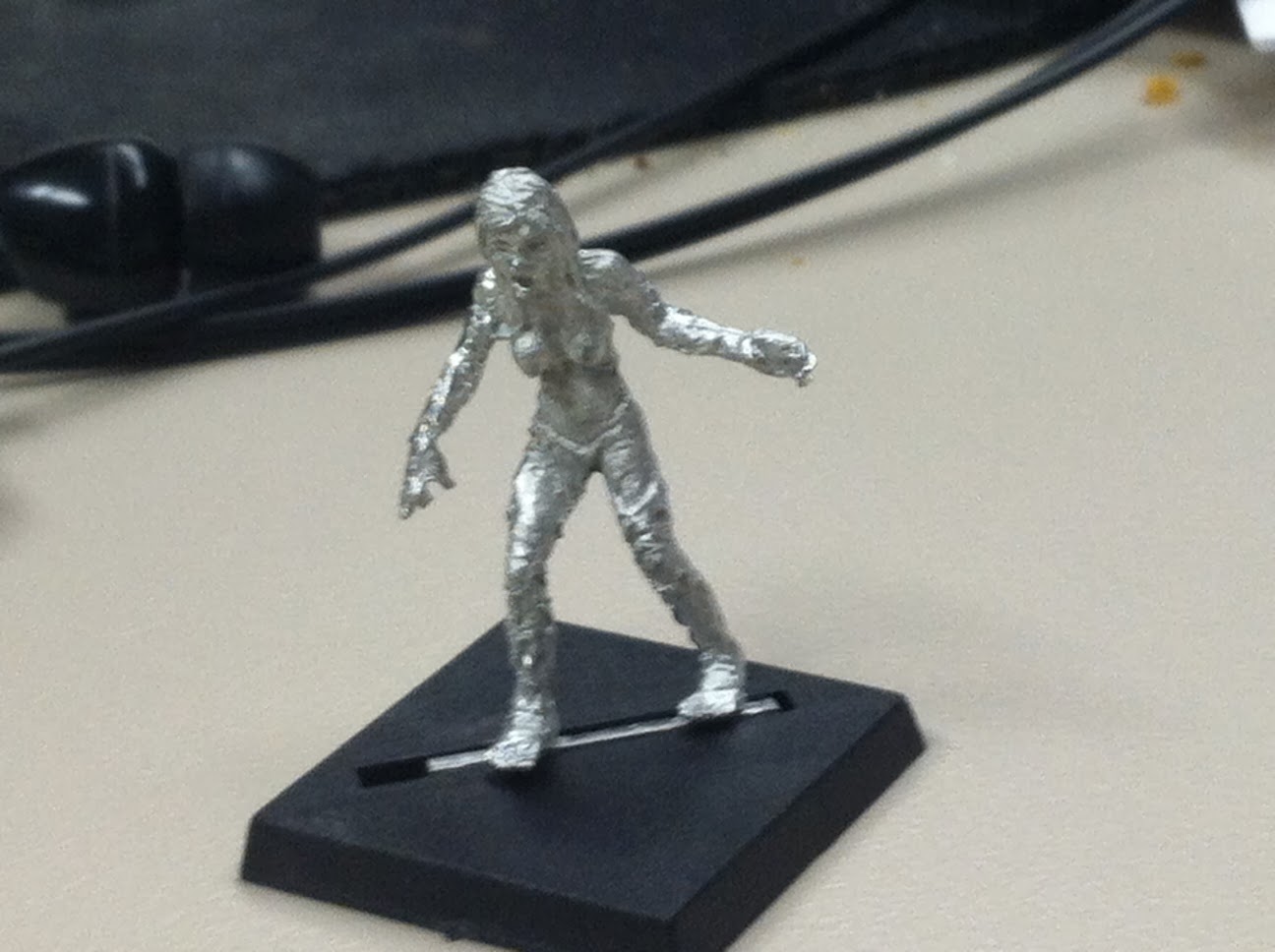 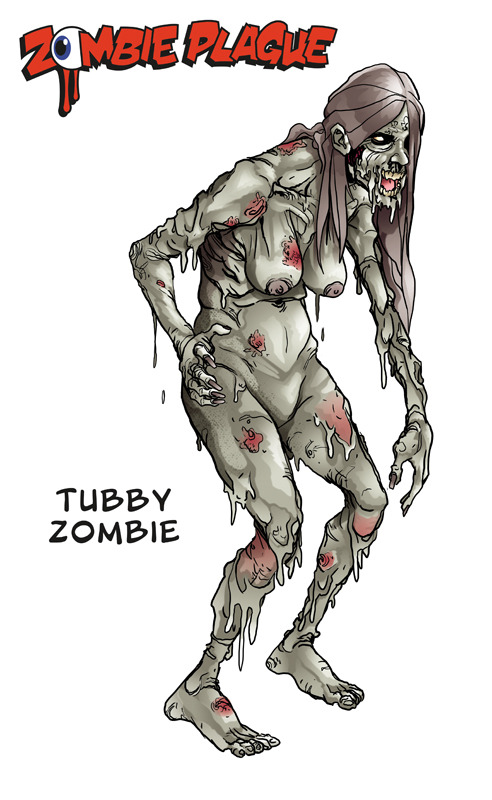 Here we have 10 themed Mud and Gutz resin bases that add horror to zombies, survivors, or just about anything. There's two each of five designs below, but you'll probably have a better result if you go the the Kickstarter pages and check Update 32 to see already painted versions. There's mud, blood, guts and skulls tromped into the dirt of these bases, and they look suitably horrifying.

So there you have it, compadres, a Kickstarter fulfillment that exceeded expectations and added unique, intriguing and useful components to my modern zombie collection. Every design choice in these figures tells a story, and it will help you tell stories through your own games. Whether you're playing ATZ, 7ombieTV, No More Room In Hell, AR:SE or Zombicide or even Last Night on Earth, any other zombie skirmish rules, these minis are a worthy addition to your own zombie horde.

So back to the boards, everybody, and I'll see you across the tables.

Remember, check back later this weekend for some more fiction from my IHMN setting featuring Miss Rossum and her Anthropomorphic Automatons and another piece revealing the women of the Ladies' Auxiliary. Cheers!

Posted by Christopher Sheets at 10:36 PM