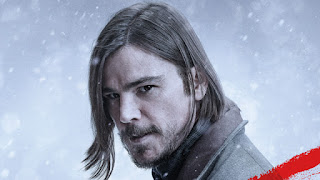 As fans of the ever-expanding world of "In Her Majesty's Name" await the release of IHMN Gothic, we craft what we can from the delectable morsels of the work that Craig and Charles have released on the official blog.

One of the hottest properties in the Gothic genre right now is Showtime's "Penny Dreadful."

I loved the first season, and the second season is proving to be quite the roller-coaster ride.

So I have taken upon myself the task of converting the main cast into IHMN stats.

Please note that I have not tried to build them as a starting company with the traditional 250-point cost. I have tried to include or replicate their abilities as seen or hinted at on the show, taking some liberties here and there to improve their survivability in-game.

F'rinstance, I have given several of the characters magneto-static bodices, where other characters have no armor at all. This is almost entirely at my whim. In addition, I have given Victor a Faraday coat because it makes sense, despite the lack of arc weapons on the show.

I've included the math in adding up the character costs below each entry, so you can check behind me or more easily make changes for your own games.

There are two main changes I can see people wishing to make. One is upping the steampunk quotient, which I have tried to address in part in the optional armaments at the end of the list.

The other is dropping the points cost of some characters to something more "livable." Here are some suggestions to that end:

Again, these are things I included to be true to the characters from the show or to enhance their viability on the tabletop.

Here's a link to the list as a pdf on Dropbox and another on Google Drive.

Let me know how you like them! Back to the boards, everybody, and I'll see you across the table soon. 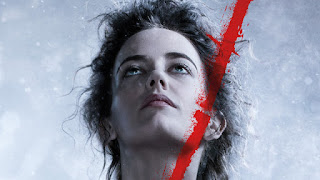 Guess what I got?

The last thing I need is a new game to get into but ...

when I heard that Wayland was going to have a few copies of the special Joker edition of Knight Model's Batman Miniatures Game rulebook on their stand at Salute, I decided I just had to have one.

I'd passed when they were up for pre-order, most likely because I was overcommitted to kickstarters at the point (who am I kidding, always).

It didn't help that I used to have a T-shirt with the design from the cover. Here's my copy: 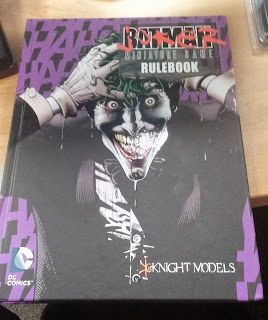 Given that I live in the States, retrieving this from Salute would've been terribly difficult without the amazing assistance of my Facebook friend and fellow member of the Tabletop Skirmishers group Andrew Bussey. Thanks again, Andrew, for being such a superb ninja shopper!

I haven't sat down with it in great detail yet, but let me say this is perhaps the most beautiful gaming rulebook I own. (Note: I haven't bought any of the recent wave of slip-covered, gold-foil bedecked rulebooks or codices from anybody. If I'm scared to put it on the table, I don't want it.) The full-page photography and full color throughout make this a pleasure to read. It's a sturdy hardback, too, and I think its price is totally justified. 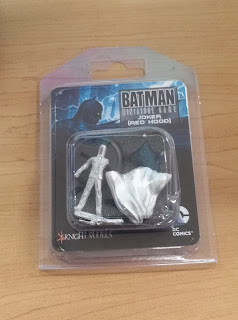 So I've returned to the Arkham City Limits Facebook group (I'd joined early on but left as I wasn't really doing anything with Batman.) If you're on FB and interested in the Batman Miniature Game, or any supers gaming, really, you need to check it out. It is among the most friendly, resourceful, knowledgeable groups I've had the pleasure of taking part in. It's right up there with A Wyrd Place and the aforementioned Tabletop Skirmishers for quality membership.

I was really going to try and pick and choose very carefully from Knight's releases for this game and only purchase figures of characters I really love -- Harley (Arkham version), Killer Croc (because alligator, obviously), Swamp Thing and Victor Szazs (because asylum lunatics -- I get them for every system I can find). But now I think I'm going to have to get all the Gotham Sirens, some of the various versions of the Joker, and I want to track down the Alfred Pennyworth that came with the Batman cover of the rulebook.

I saw in the new releases they're putting out Joker's Daughter in her New 52 incarnation. Here she is: 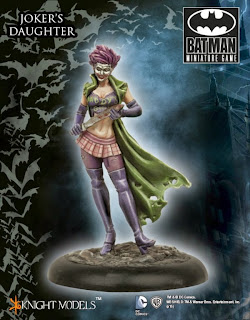 But I much prefer the previous version where she was all steampunky and known as Duela Dent. (The new one is Duela, but they haven't revealed her last name, I don't believe.) She's become pretty famous because of the cosplay meme involving someone slagging off the cosplayer and everyone else shouting that person down for not knowing what they were talking about.

But here she is from the comics: 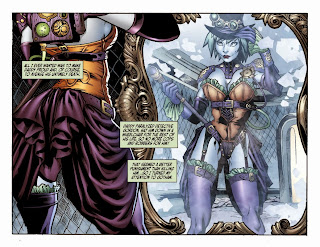 And here's that cosplay meme: 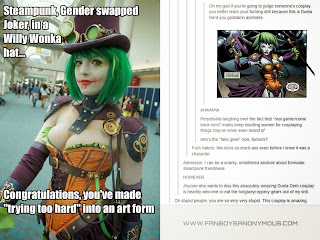 Now, if they'd make a miniature of that version of her, I'd buy them by the truckload. OK, not really, but I'd buy several, most likely. As it stands, it shouldn't be too hard to find one of the many female steampunk figures out now and do a conversion, or maybe just a paint job would be enough, depending on the figure.

Suggestions for figures for Duela Dent's steamy goodness, anyone?

While you think about that, I've got to head home.