Got my Heresy order in, folks! Andy Foster sent me a nice email when it shipped, apologizing for the holiday delay, when the holiday delay was the entire impetus behind my order, as Andy always takes a week or so off and offers a nice discount for orders placed during that time. Even if I can't order from him at any other time of year, I always make it a point to order during his holiday sale.

This year I added to the denizens of the Whoniverse that I can add to my gaming table. I have the Doctor Who Miniatures Games rules, which are free to download, and they run on the same rules that power 7TV, plus I plan on adding the characters to my VSF/steampunk universe as well. (I've got to come up with a name for my setting!)

So here we have my choices:


Again, my apologies for my half-baked photography. And once I get more of my collection painted up, I apologize for the sheer number of Michael Jackson parody miniatures I own.

Next time, I'll tell you about the local gaming store I've finally been to. I know, right?

OK, back to the boards everyone, and I'll see you across the tables soon!
Posted by Unknown at 11:49 PM No comments:

Wide is the path and broad is the way

Like others, I received my Hell Dorado kickstarter package the other day. I knew from Cipher's frequent updates that it would be arriving soon, but as they didn't send out tracking or individual notices that packages had shipped, it actually slipped in unannounced. So it was quite pleasant to receive it when I checked my post office box Thursday. (I also got my recent Crooked Dice order, but more on that later.)


I wasn't able to go in very large on the Hell Dorado pledge, as so many other worthwhile projects were soaking up my hobby budget. I got the Marbas package: the new Inferno expansion rulebook, the Inferno character cards, signed art lithograph (the size of a post card, but a beautiful rendition of the Inferno cover art) and the kickstarter-exclusive model of Anne Hale. I also plumped for the mini of Sun Wu Kung, the Monkey King. He's one of my favorite literary characters, and I really liked the concept art behind this rendition of him.

From Crooked Dice I received my order I placed with some of my Christmas cash I. I got Tweedy 2, Miss Temple, Belle, the Traveling Tweedy heads, and the set of Time Lost Investigators. In addition, Karl and Graeme saw fit to include a couple of freebies, a Captain Jim Barrowight and a sprue of Federated Security carbines. Now would be a good time for anyone interested to place an order with them, as they've got 25 percent off all non-new release minis until the end of January with the code JAN25OFF.


OK, so those are my latest pieces of ill-gotten booty, or ill-booten gotty for that matter. Back to the boards, my friends, and I'll see you all across the table soon!
Posted by Unknown at 10:02 PM 9 comments: 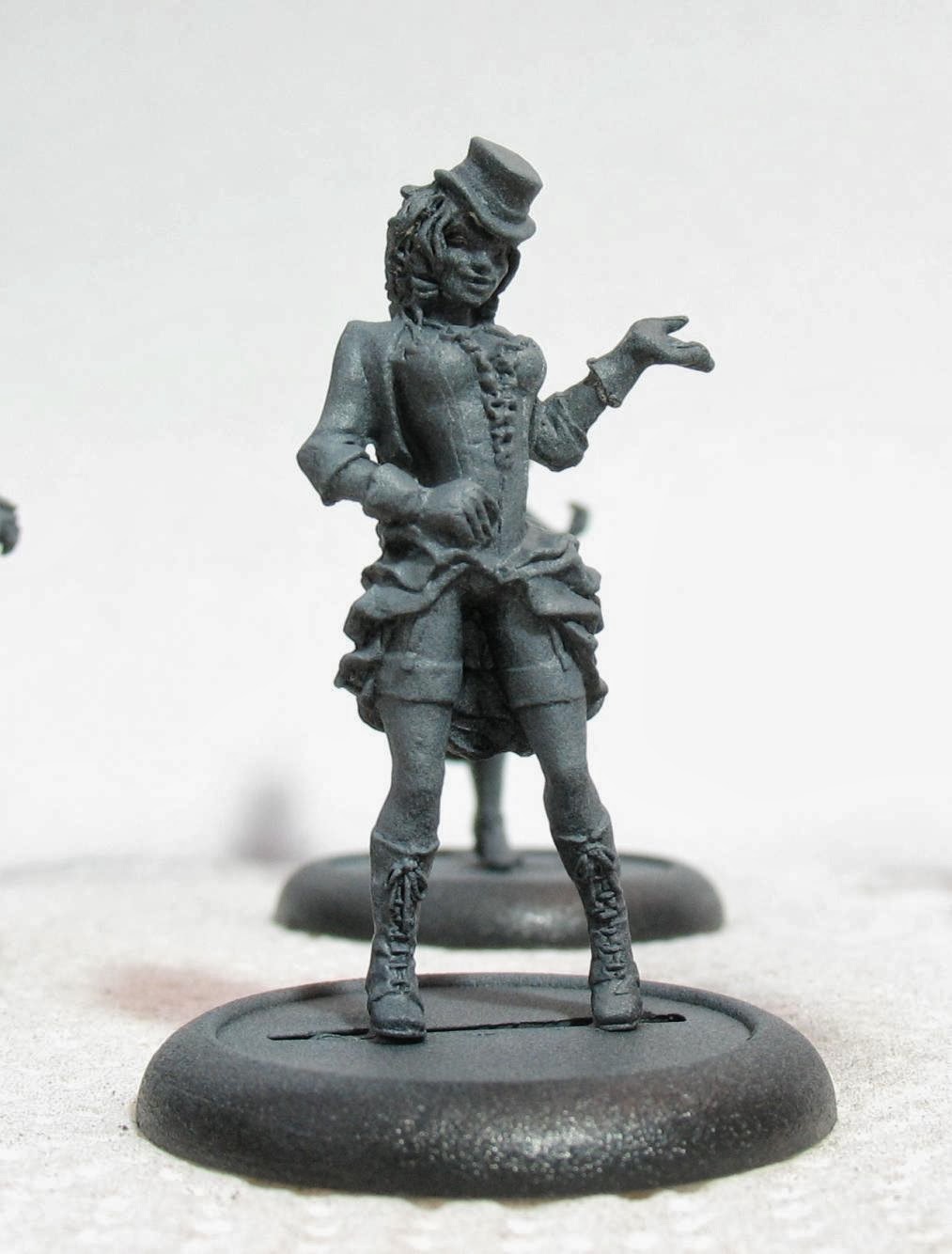 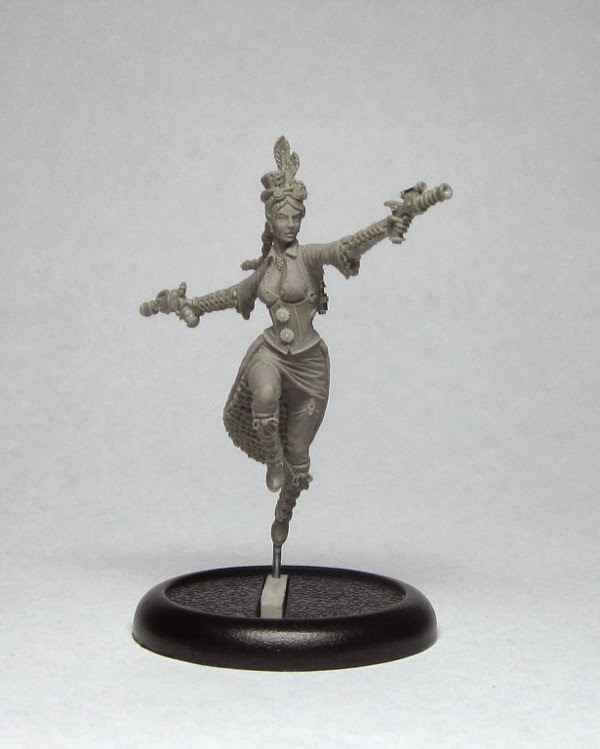 And I'm sure there are others out there I've missed. What would you suggest?
Posted by Unknown at 8:05 AM 13 comments:

Those who followed the comments on my last post may have seen that the vagaries of blogger made me miss welcoming another new follower.

And in this case, I did this grave disservice to Robert Arduin, author of one of my favorite blogs, Fiends in Waistcoats. I follow many blogs, but there are several that bring a big smile to my face when I see new posts from them. "Fiends in Waistcoats" is definitely one of those. Robert intersperses excellent game content for steampunk and VSF games with well-written, informative pieces about historical and literary features of London and the Victorian era.

So welcome aboard, Robert. It is truly an honor to have you here.
Posted by Unknown at 1:06 AM 3 comments:

Email ThisBlogThis!Share to TwitterShare to FacebookShare to Pinterest
Labels: Fiends in Waistcoats, welcome

Today we welcome Dawfydd aboard as a new follower and member of our jolly band of miscreants.

Blogger is playing silly buggers with a lot of data, but I see that Dawfydd follows many of the same other blogs that I do but doesn't maintain a blog of his own. Again, at least as far as I can tell. If I'm wrong and there's a blog of yours out there you'd like me to mention, Dawfydd, please contact me and I'll rectify the situation.

So welcome aboard!
Posted by Unknown at 6:10 PM 7 comments:

Email ThisBlogThis!Share to TwitterShare to FacebookShare to Pinterest
Labels: welcome

Putting forth some token effort

One of the nice non-miniature items that came out of the Empire of the Dead Kickstarter from West Wind Productions was the sheet of laser-cut steampunk counters.

In addition to the precut sheet of card or very thin wood or whatever it is, it came with plastic tokens to which one attaches the actual counter. (One can be seen atop the sheet below in the lower left corner.) There's also a translucent, small d6 in the bag. Very cute! 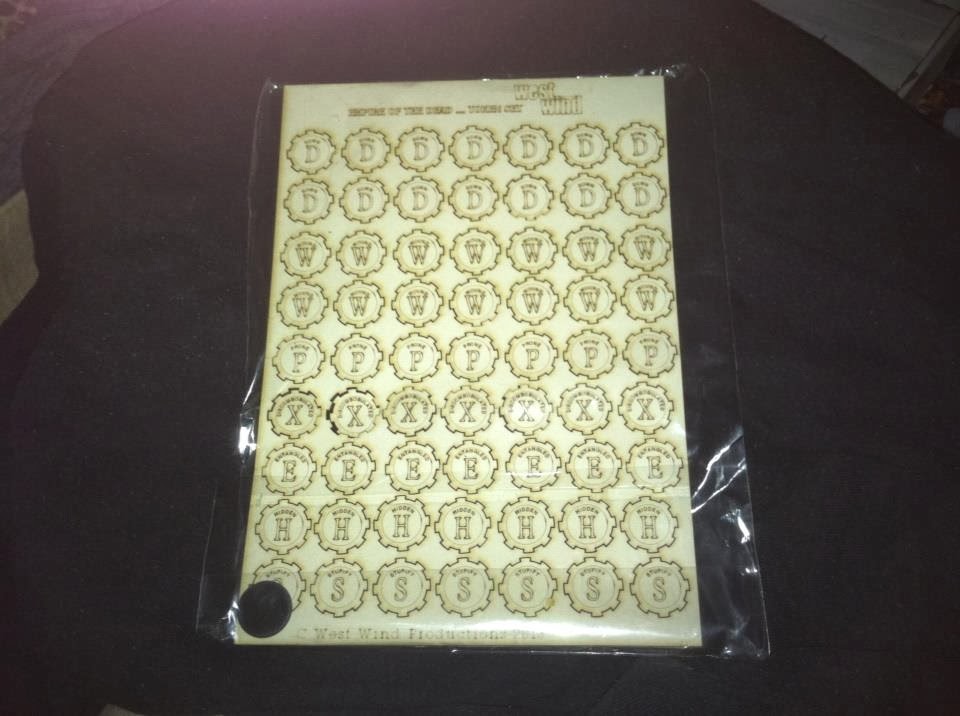 So given that state of my vision and my accelerating decrepitude, once I get these goodies on the table I want to be able to see them better. They're wonderfully etched, or burned, or whatever magical process was used to inscribe them, with both a letter and a word indication the counter's meaning. But I know standing over a table, even if I have my new bifocals on, I likely won't be able to read the full word. So let's make the letter as visible as possible.

To that end, I picked up a Minwax Stain Marker at the local big-box store (for about $5) the other night. I chose "Early American," mainly because they only other marker color they had in stock was "Ebony," which was a lot darker than I wanted to go for. I still want these counters to evoke the polished wood-and-brass ethos that steampunk is so known for. 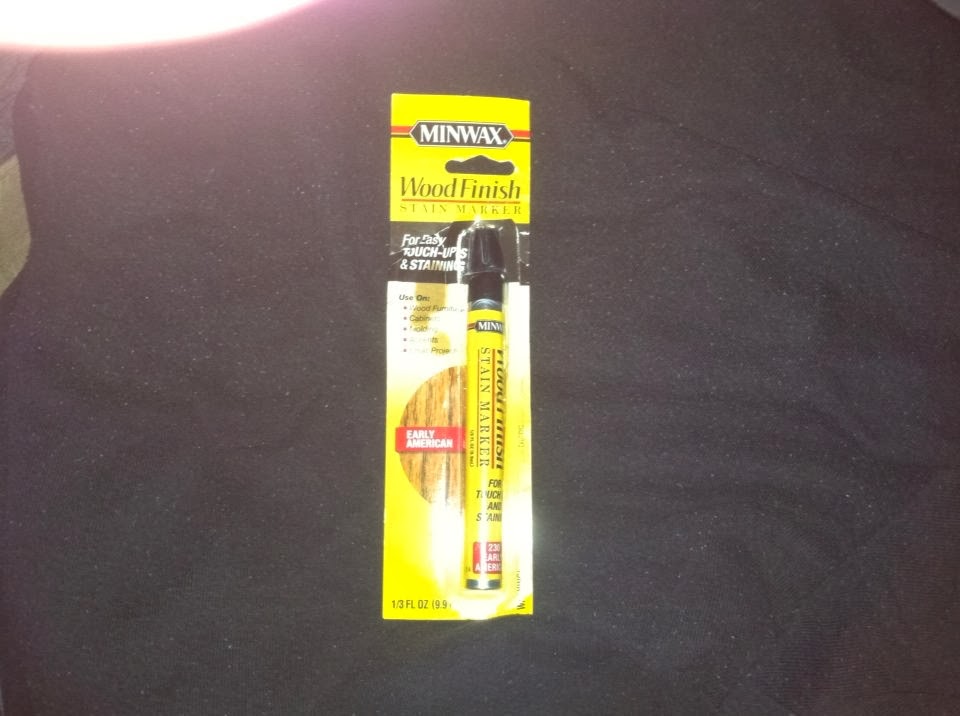 I did these fairly quickly, knowing that, as deft a hand as I am with a chisel-tipped marker, that I still wouldn't be able to totally keep the stain within the lines. I know my limitations!

So here are some progress shots. First, I've darkened only the first row, to show you the improvement in contrast. 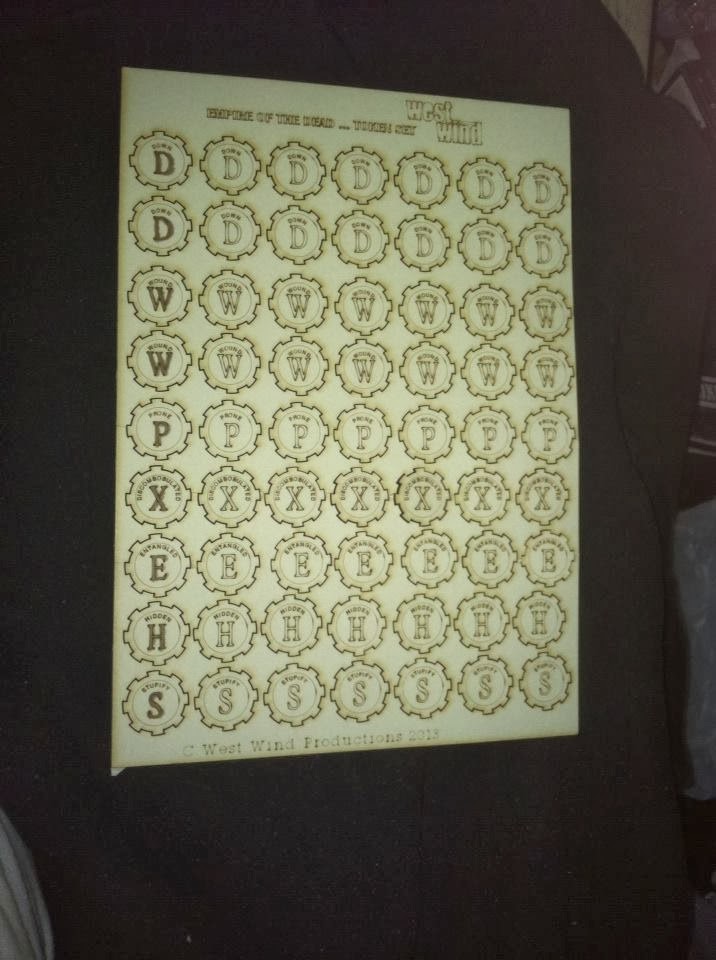 Now, I've done all the letters once. 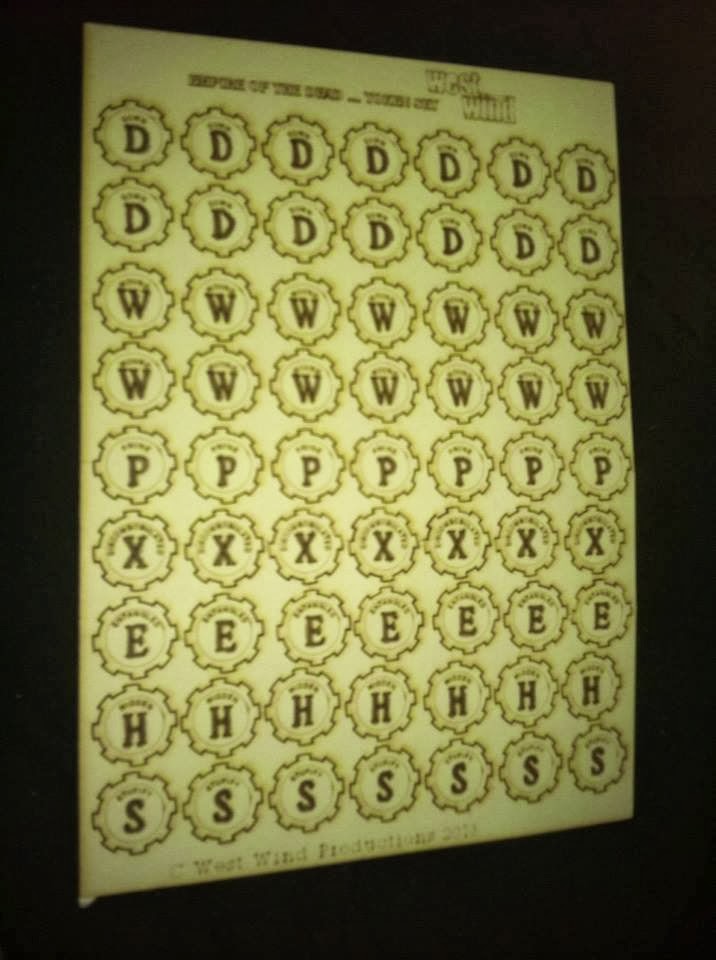 And here, although there's scant difference, I have gone over the letters a second time. 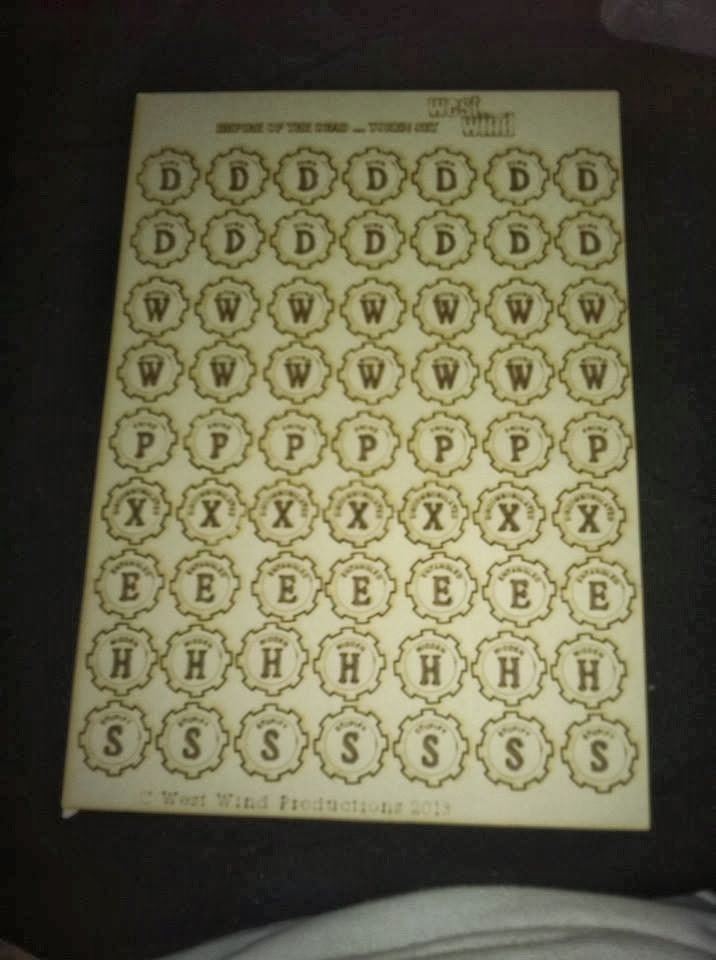 Next I plan to grab a can or real, honest-to-God wood stain and do the whole sheet. Probably just a "Natural" tone, to keep the contrast, maybe a "Golden Oak" or "Golden Pecan." I'll have to wait until next week to do that though, when I've reclaimed a little more space to work in.

Then I'll glue the plastic tokens to the counters and viola!, we'll have a full set of the little buggers.

Back to the boards, everyone, and I'll see you across the table soon!
Posted by Unknown at 9:10 PM 8 comments: