All hail the Roebeast! Tremble before his might! His coming presageth the End Times! All ha --

Oh wait, not that beast. The one I mean is the Roebeast, Brian S. Roe of RSquared Studios. I love Brian's work, and now I've reaped the rewards (half of them, anyway) of supporting his kickstarter for minis of Zombie Plague survivors.

Back in 2011, Brian and his production partners ran a kickstarter to release a comic book combined with the rules of "Zombie Plague," a set of zombie boardgame rules that Brian co-created and have been around and available on the Internet since 2001. They also released print-and-play game cards, card miniatures and map cards for the game.

Now Brian has come out with survivor minis for the cast of the comic book, which is called "Zombie Plague: The Day From Hell." Pictured below, from left, we have resident badass John Blackthorne, cheerleader Chelsea Harlowe, baseball nut Timmy Leong and rocker Crissy Hot-Rod, high schoolers who must confront Day 0 of the zombie apocalypse. These 30mm white-metal minis are crisp and clean. Arms and weapons are attached by sprues to the minis, and the minis are supplied with square, slotted bases. (I seem to have let Crissy's hockey stick escape the frame here.) 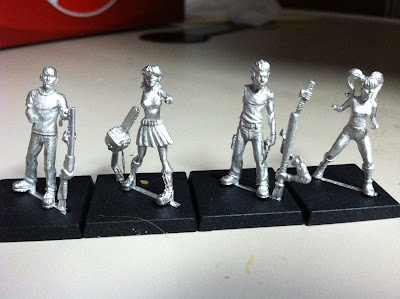 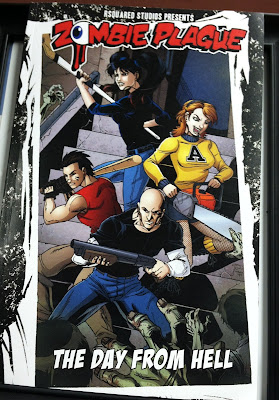 As stretch goals during the campaign, several zombies were unlocked: Joe Zombie, Rose Frum, Dead Sexy, Dirt Nap and Tubby. Scenic bases are also being created. These are still being eagerly awaited.

I must say I love these survivors and am eager to toss them in amongst the various other survivors I've acquired through Zombicide and from other sources (Hasslefree mostly). Of the comic book, I can say it's nice to have a hardcopy of the Zombie Plague rules I downloaded oh so long ago, and the kids' story is a winner. (Chelsea's discovery of the chainsaw is worth the price of admission alone.) The art was solid but the backgrounds seemed to be lacking a little in the detail department. They were a little overstylized or oversimplified for me. But I still enjoyed the comic.

The comic/rulebook is available from RSquared's online store for $15 plus shipping and handling. The map cards, game cards, and card minis and barricades are all available from free download from the site as well.

Back to the boards, everybody, and I'll see you on the other side.

Posted by Christopher Sheets at 10:57 PM