In Her Majesty's Name and other goodies arrive

I was remiss a week or so ago in documenting the arrival of figures from Ainsty, which I had ordered through the Weird Wild West indiegogo campaign.

I had backed them for just one figure (Vampire Hunter Abe Lincoln) but once the fulfillment stage was reached, Ainsty )which had purchased the line) decided to give more than was pledged for. Unfortunately, the first package to me was lost in the international mail, but I finally received them a little over a week ago. In addition to the Abe Lincoln figure. I also received a Vampire (who reminds me of the monster from "The Vampire of London"), and a Native American woman. 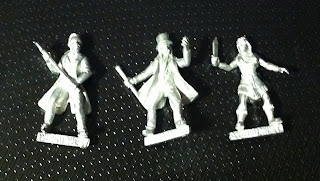 Additionally, I received my order from the "In Her Majesty's Name" nickstarter from North Star. Like many in the States. I placed my order through Lon Weiss at Brigade Games. I ordered the Servants of Ra pack. Stretch goals I got included the Master Criminal (Moriarty) and Jack the Ripper. The Ripper figure comes with this giant steampunk claw, which many must've agreed with me was totally inappropriate for the Ripper. Nobody with that claw is going to be disassembling a body with surgical precision or disappearing into thin air. Luckily, North Star made an alternate human arm holding a knife/scalpel available for purchase. I hope to find another use for that claw at some point. 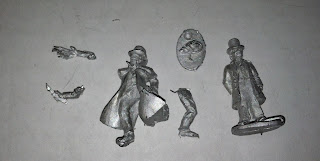 The packaging for these minis is GORGEOUS. The boxes are actually multiple-disc DVD cases, and the cover inserts are really sharp, featuring those masterful Kevin Dallimore paint jobs. Inserted behind the cover was a nice, printed index card-sized cheat sheet with the stats for the faction. Very nicely done. 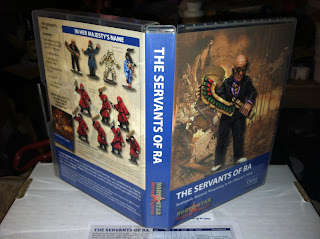 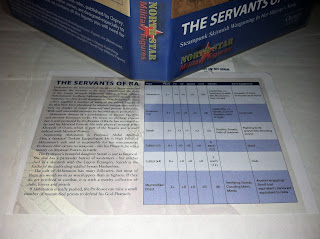 This shipment didn't include the Osprey rules -- Lon says they'll follow in a couple of weeks. Even without having seen these original rules, I've already pre-ordered the next volume, "Heroes, Villains and Fiends," via Amazon. Current release date says Nov. 19. 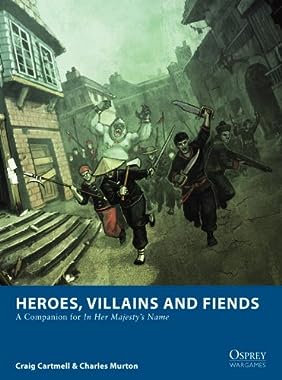 I love reading rules, but I don't expect these to supplant Empire of the Dead in my affections. There's a warmth and intuitive feel to EOTD that I love. I fully intend to use this faction with the Cult of Sutekh supplemental rules that Doc Warlock wrote.

I really like the way these turned out. The poses are dynamic, the integral bases aren't bulky, and the mold lines are minimal. There is, however, a lot of flash, as you can probably see even in my subpar photos, but I'm sure I can make short work of it all with an X-ACTO knife. (Accept as read my usual excuses for poor photos -- shot on an iPhone 4 with one house lamp and camera flash while balanced on my lap, etc. etc.)

As for how I would use these with Drew's rules, Ahkenaton makes an exemplary human-form Eternal holding a khopesh (sickle-sword). The next figure, Professor Abir, is an officious-looking Hum-Natir, or cult leader, followed by a Mummified Priest usable either as an Eternal or a tomb guardian. The femme fatale figure Sairah, Professor Abir's beautiful daughter, could also be a cult leader, or perhaps the human form of a female Eternal. 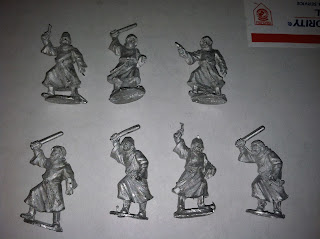 The remaining seven figures are all cultists, Acolytes in Drew's rules. I'm very happy with this faction and will likely purchase some of the others.

Oh, and while I know I seldom, if ever, mention the various chibi minis out there, it must be said that I go all SQUEE for the models. I don't own Super Dungeon Explore from Soda Pop, but I do have the metal miniatures of the original heroes from the game and the kobold dragon priest. I also picked up the Princess Ruby promo they released when the Caverns of Roxor expansion was released. Well, they just released their Gothic Horror supplement Von Drakk's Manor. They again released a promo mini -- a succubus -- but sadly she's only in plastic this time. Still, she's adorable, and here she is in her unpainted glory: 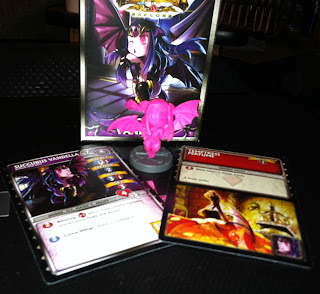 That's it for this time. Back to the boards, everyone, and I'll see you across the table soon!
Posted by Christopher Sheets at 12:47 AM