The Women of the Ladies Auxiliary

Here's the second piece of fiction I promised you, an introduction to the women of the Ladies Auxiliary and their manifold mission.

Thanks to everyone who's stopped by and read the earlier Miss Rossum piece. If you enjoyed it and would like to keep up with developments, please consider joining the page as a public follower.

I'd also love to hear your feedback. Constructive criticism would be wonderful, but whatever you're comfortable saying is welcome.

So, without further ado, I present, "At Cross Purposes."


Seated at the large oak desk of her study, Letitia Kensington accepted the sheaf of correspondence from her secretary-cum-librarian. Like many of the women in the Ladies Auxiliary, her secretary availed herself of a sobriquet, having left her old name, and her old life, behind. And since she now lived in the world of books and letters, her secretary had chosen the nom-de-plume Lora Ipsum.


Letitia, as the public face of the organisation, did not enjoy that freedom. She was well known as the head of a public service organisation of ladies who used their husbands’ or fathers’ money to improve the lot of the less fortunate.


And while public improvement was indeed part of the organization’s mission, it was not the subject of the reports she received today.


These were field reports from her many agents and operatives, and they covered issues and concerns as varied as the flowers outside Letitia’s study window.


“Anarchist activity in the communes,” one read. “Theft of Egyptian artifacts at British Museum,” read another.


We seem to get that one every other week, she thought.


Sweet merciful Lord, she thought. What sort of trouble are those well-meaning idiots about to unleash upon us?


That bastard’s beating her again, Letitia thought. It may be time to bring her into the fold.


The secondary mission of the Ladies Auxiliary was surreptitious aid to women, and sometimes their children, who were being abused or exploited. It was a mission some suspected and whispered about.


“Large walking alligators rumored to be in sewers. Laughable, but may bear further investigation to determine what is actually transpiring there.” “Corpses seen walking through graveyard; some seem to have machinery added postmortem.”


There are things man was not meant to know, she considered. Women do not have that luxury.


For the true mission of the Ladies Auxiliary, the original surreptitious reason for their founding, was to hunt and destroy monsters. The creatures of ancient myth and fable and the abominations of modern scientific inquiry walked abroad in the land, and it was the ladies’ duty to stop them, to protect hearth and home when no other could.


Letitia hefted the last bundle of documents, which included a hand-written report, witness interviews, even diagrams of the lay of the land.


The first thought through her mind was “threepenny opera.” It was her own private name for an operation that required the attention of her three best covert agents -- the elite fighter going by the name Penny Wise, the driver/pilot Penny Lane, and the occultist known only as Penny Dreadful. Together, there had been no challenge yet they could not overcome.


But she alone among her agents had faced the lords of the night before. She looked at the nearby hatrack where hung her long red scarf. It was what marked her among her colleagues in the Ladies Auxiliary as a vampire slayer. It was her badge of office as leader of the London chapter. And it was worn in imitation of the woman who had presented it to her, the very founder of the Auxiliary.


Letitia opened a drawer and removed her freshly oiled sidearm.


“Lora,” she called. “Have the carriage readied. I’m going out.”


Miss Ipsum leaned into the room, her eyebrows raised. “Ma’am?”


“And send word to the central office. Tell Mina Murray I believe her old acquaintance is back in town.”


Here's one of the minis I have in mind for Letitia Kensington, the Dark Sword Miniatures Jen Haley figure.

Of course, given that I've adopted the red scarf that features so prominently in Alan Moore's "League of Extraordinary Gentlemen," I'm also considering the Ironclad Miniatures Mina Harker.

One thing I'm certain of is the figure for Lora Ipsum, the Anima Tactics Sophia Ilmora miniature.

Of course, that's just until the Wyrd Malifaux "Through the Breach" kickstarter arrives. The concept art for its archivist miniature is fantastic. 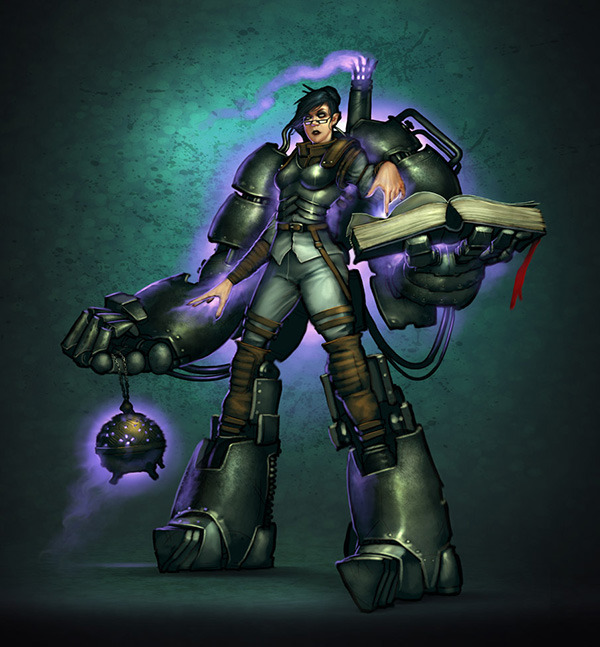 And here's the render: 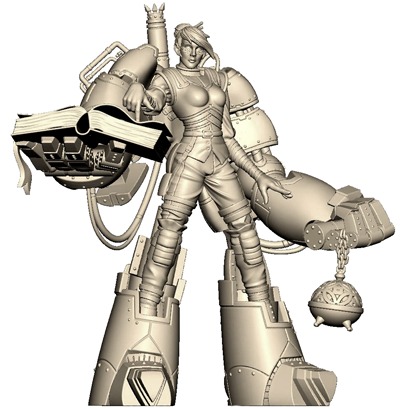 Posted by Christopher Sheets at 9:55 AM