The latest in my largely uninformed opinions

There's a lot going on in the gaming world right now, and lots and lots of electronic ink is being spilled on various sides of multiple issues. In the off-the-cuff, top-of-the-head, shoot-from-the-hip kind of coverage you've come to expect here at Dispatches from the Rim, I am going to give you my feelings on some of these issues.

-- Games Workshop is curtailing Internet sales of its minis except in its own online store. In North America, its trade account policies are spreading from the U.S. to Canada. At least, that's what the documents seem to be saying. I haven't worked in retail in years, and I was never at the "dealing with trade accounts" level anyway. Their policies seem pretty draconian to me, and I wonder if their short-term gain is going to hurt them in the long run.

Because of these changes, MiniWargaming has decided to close its online store. This makes me sad, but I was not a customer of theirs. They are running a big closeout sale, so that might be worth looking into. I'm sure others are contemplating similar actions, so I wish these shopkeepers well in their deliberations and decisions.

-- Another closure I just learned of was Dastardly Designed Games, which was until recently The Armchair General, makers of the steampunk wargame When the Navy Walked and the hilarious skirmish game It Came From Beyond the Still, also known as Aliens vs. Hillbillies. Owner Robert Adams stated on the various company blogs that, because of a lack of customer interest, the game company will close. The two new books he had in the pipeline for ICFBTS will appear on Wargame Vault as pdfs and print-on-demand products. I'm glad of that, as ICFBTS III is "From Reel to Real," which brings the world of B-movies into the game.

I'll be sad to see this game no longer being developed, as Robert has a great imagination. He says he's likely to keep the blog going, and I hope he does.

-- Google Reader is being shut down. This sucks. I love Google Reader and use it all day, every day. Let me know if you've found a good replacement RSS aggregator. I just hope this doesn't mean Blogger is next. Guess it's time to learn how to use tumblr. 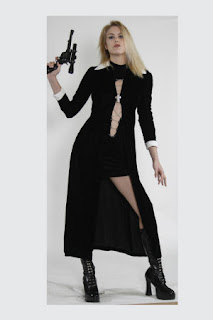 -- Now the good news: Ed the Two-Hour Wargames guy has added two 28mm minis to his store. These are ones I've wanted practically FOREVER, and I've been bugging him about at last one of them for YEARS. Longtime fans of THW will be familiar with Carolee, the THW girl. She was the "poster girl" for THW and had some very attractive poses in a sexy black outfit carrying a sighted pistol. She also appears as an NPC on a special card in the Risks and Rewards game aid deck for All Things Zombie. 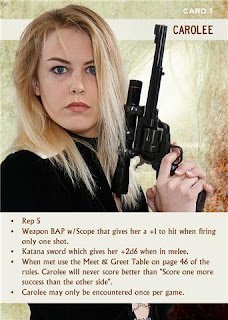 Ed's long sold a 15mm version of Carolee, but now a 28mm version, sculpted by Richard Deasey,  is available. He's also made available an older Patrick Keith mini, which was called Trixi the Recovery Agent. The Trixi mini previously played the part of Suzi in the THW gameplay examples. So she's available again, in the THW store. (Trixie was also one of the "relic" rewards in Patrick's recent kickstarter for his Bombshell Babes.)


-- Just heard today that Kevin Adams, lord king sculptor of all things gobliny and orcy, was seriously injured in a knife attack Wednesday by three men when they invaded his home to rob it. They demanded jewelry, according to the website of the Nottingham Post, and Kevin suffered "significant injuries to his face and a cut to his shoulder," from what is presumed to be a kitchen knife. Police were still seeking witnesses to the late-afternoon incident. An Apple iMac computer was stolen during the incident, the report says.

Ian Brumby at Fenris Games has been doing a great job of keeping everyone up to date on this (he provided the above link as well), and he and others are looking to produce new minis, sell some of Kevin's sculpts, or outright just make donations to help Kevin with the expenses of his recovery. More manufacturers are banding together in this cause as events go on, so I would say check with Ian for the latest and how you can help.

-- RIP: The horror world lost some notable lights this week, authors James Herbert and Rick Hautala. They were 69 and 64 years old, respectively.

More as it occurs to me, folks. Also, again this week, there was no "welcoming Wednesday" post because, even though readership is slowly increasing, we're holding steady at 38 official followers of the blog. So thanks, everybody, for keeping it real, making it fun, and for keeping it real fun for me to share this hobby with all of you.
Posted by Christopher Sheets at 9:39 PM