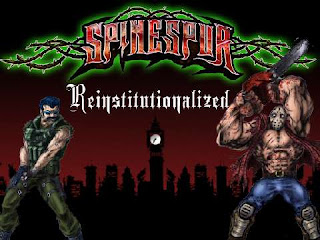 I really like the game Spinespur from Comfy Chair Games, because it is OFF THE CHAIN. It is absolutely INSANE. If you can imagine it in the darkest cockles of your twisted little heart, it will fit right into Spinespur. Serial killers, degraded angels, religious maniacs with tech powered by sin, a dark church led by the Anti-Pope, in a place that is all its own, a dark reflection of blighted urban cityscapes and exploited rural farmland, a vaulted mad-science Asylum and so many other dark, twisted visions that you'll positively salivate at the thought of it.

I wanted to hold off on doing this post until I'd re-read my rulebook, but I can't put my hands on it. So I'm going ahead because people need to be reminded that Spinespur is out there and is the subject of a current Kickstarter. You can pledge to a level that will get you an exclusive hardcover version of the rulebook (yeah!) and all the models for an agenda in the game. Add-ons include corpse tokens, character cards and previously released Spinespur models at discounted prices. 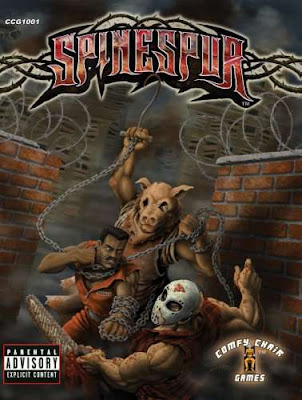 I had a chance to chat with Bob Mervine, head of Comfy Chair Games and creator of Spinespur, about what else we're going to see as the game develops. He assures me that the first book, Threshold, set the stage, but that the next book, Covenant, "is going to get the stage BLOODY!"

I asked Bob what the future holds for Spinespur. In addition to the new book, we'll see new models for each of the current agendas: the Dark Faith, the Institution, the Men of G.O.D. and the Slaughterhouse. We'll also have new agendas for existing models: Carnalvale (Mr. Jingles), the Wilds (the Cerebeast), the Graveyard (the Caretaker and the Grave Golem), the Orphans (Amy Brighteyes) and the Church of Metal (Sex Star Six).

Bob also said that, while fulfillment is slated for November, if there are no production delays he hopes to have the models and the game accoutrement ready before that. He's working on a gameplay animation for the KS website and has announced he's hired a digital sculptor who should have renders of some more of the forthcoming models before the pledge period ends.

He's also got Patrick Keith (of Bombshell Miniatures fame, which had quite a successful "Babes" kickstarter in its own right) sculpting the female Nightengales and the female figure for the Shattered, and Tim Prow will be sculpting the new Pigstickers, which will feature three, not two, in the blister, for the same price.

If you're a fan of horror, dark fantasy or gore and want a game with near infinite flexibility in how you build your tabletop force, you must try Spinespur.

If backers will pledge just $500 more to the campaign, we'll reach the first and most important Stretch Goal: the pdf of the STREET CHUM beta rules, which is the campaign system for Spinespur, and an imposing-looking mini that will be free to anyone who pledges $38 or more. It's a bulky figure wielding a chainsaw, but the rounded silhouette of his head makes me think it's someone new and not Pigskin or Hack. It almost look like he's wearing a diver's helmet, like that creepy Scooby Doo ghost!

(Just heard from Bob at Comfy Chair and I was right! He's a figure that you can use as a Chainsaw Thug, a Boss Thug in the Street Chum rules, or a "Make Your Own Character" in rules that will be released in the second Spinespur book. And Bob is letting me reveal him here in my blog! Feast your eyes, people.) 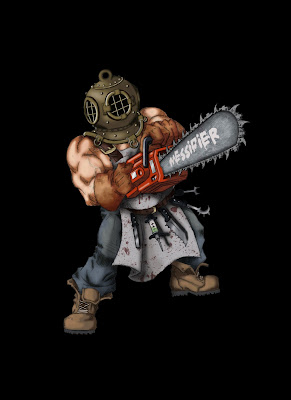 For those of you out there who are zombie gamers (not zombies who game but who play games involving zombies, just so we're clear), Spinespur has them too. In its way. Which is dark, sick and twisted. And cool and innovative and brilliant. 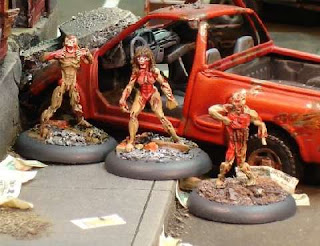 There are the Torn, who are reanimated dead of the enemies of the Anti-Pope. Knowing they are now compelled to fight on behalf of the Dark Faith, these victims often try to tear their new bodies apart with their own hands. 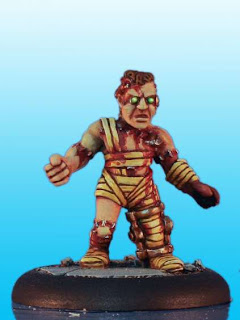 There are also the Little Ones and the Composites, creations of mad genius Doc Akron. Little Ones are insidious and devious monsters created from the bodies of small people. They are reanimated corpses, flesh golems, a la Frankenstein's Monster, at about one-third the size. The Composites are cannon fodder for the battles in Spinespur, assembled from leftover pieces in a haphazard fashion and rushed back to the fray. 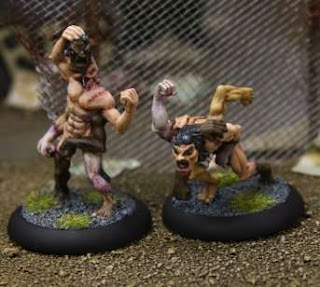 And keep in mind, these minis I'm showing you above (except our diving-helmeted chainsaw thug) are the ones that are AVAILABLE RIGHT NOW. The Kickstarter, my friends, is to create the last few minis that are needed to finish up those whose rules are included in the first book. There's a pledge level as well if you just want the new stuff. Those models look like this: 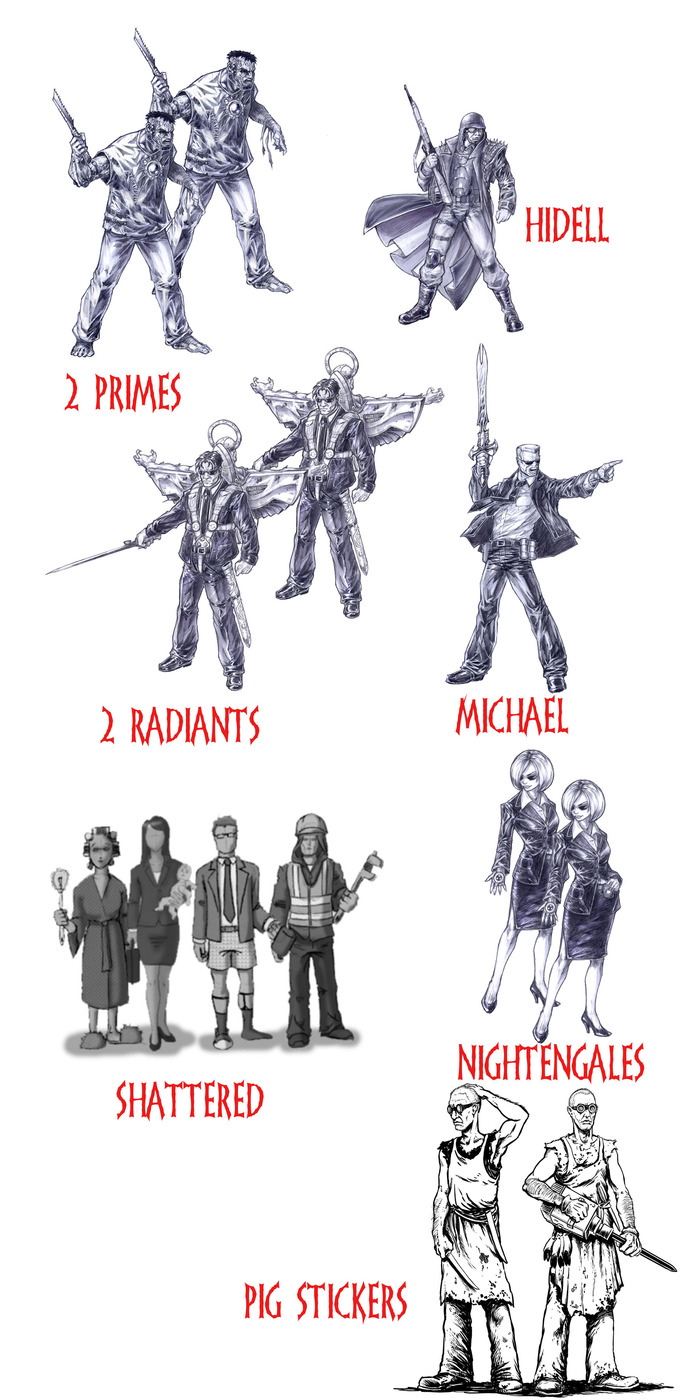 So get out there and throw your support behind Spinespur. The nightmares you'll have, and create, will be entirely worth it!

Posted by Christopher Sheets at 6:25 PM