Empire of the Dead: Requiem kickstarter

West Wind's kickstarter for the miniatures expansion of Empire of the Dead, called Requiem, is certainly going great guns. Once it launched on Valentine's Day, its £5,000 goal was fully funded in two hours. I plumped for one of the early bird specials at the £75 level, making sure I get my grubby mitts on all the LE kickstarter-exclusive minis they're producing, plus 28 points worth of the new models.

As of this writing, the campaign has taken in nearly £34,000. As the funding level increases, miniatures within the factions are being unlocked, and stretch goal miniatures are being added. The difference is that everyone pledging Requiem-level (the aforementioned £75) and above gets the stretch-goal minis (which are limited-edition kickstarter-only) for free. Unlocked minis can be chosen with the points you receive for your pledge level. (Most human-sized minis are 1 point, some larger ones, like Mr. Hyde, the Baron's Monster or the squamous Professor Gecko are 2 point minis.)

So what of the stretch goals and unlockables have been revealed so far? First the exclusives: 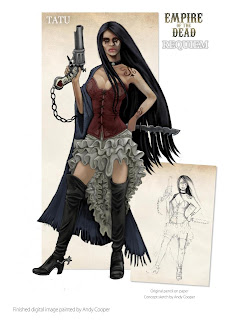 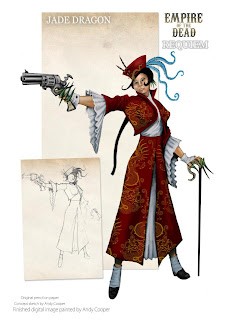 First up was Tatu, who Andy says is a half-vampire servant of the Broken Dawn cult. I guess that makes her a Dhampyr. At right is Jade Dragon, an Imperial assassin wielding a massive twin-barreled pistol. Again, these are free with your pledge at Requiem-level and above.

I neglected to mention that every supporter at the £5 level and above receives the LE mini of Nedezhda Durova, vampire hunter. I took this image of her from the project page on Kickstarter. 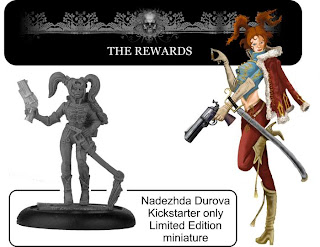 Werewolf Hunter Aisha will be the next stretch goal mini to unlock, once the campaign hits £40,000. 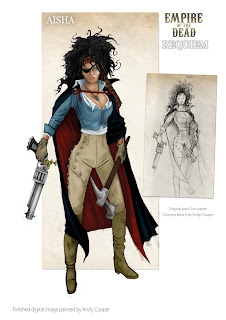 It also appears that two minis for the Order of the Dragon set (vampires, of course) have been unlocked. The Mad Man and the first of the Vampire brides. 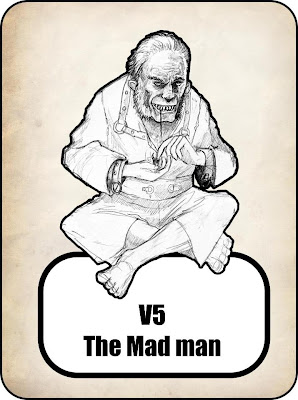 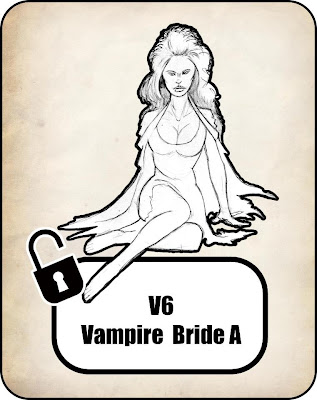 If you're a backer, go to the update about the vampire bride and suggest a name for her. My google-fu is sometimes wonky, but it seems in Stoker's book the brides are unnamed (and are called "sisters" but not brides), and they have acquired names in some film adaptations and written reimaginings. Although I chucked a few suggestions of my own in there for Andy, I really like Marcin Zdybicki's suggestion to call her Ingrid in honor of the late, great Ingrid Pitt, who played Carmilla in "The Vampire Lovers."

That wraps up everything I've seen so far about the single figures. I haven't been combing the comments like I usually would, but I see Andy's been answering questions there. Here's the big graphic with many of the figures that are part of this project, but there are higher-quality versions on the project's main page. 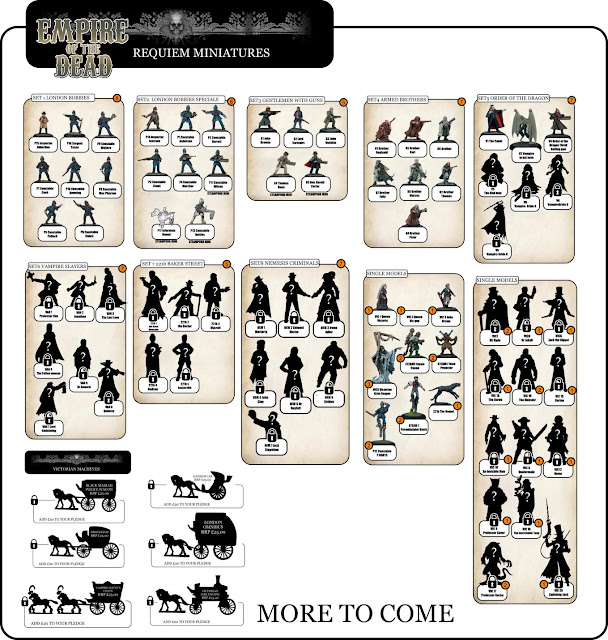 Later I'll come back and discuss the new faction they revealed today, Scotland Yard's Supernatural Branch, as well as they vehicles they're working on.

On a personal note, I want to greatly thank everyone for their words of care and comfort last night when we had to take my wife to the emergency room after she fainted and fell. She's feeling better, just bruised and a bit embarrassed. And pissed off about the scrape on her forehead where she hit the floor! But she's doing much better today, and we're both relieved this wasn't another incident where her hemoglobin had dropped precipitously low, like it did a few years ago. They admitted her that time, and it took an enormous amount of transfused blood and intravenous iron to get her back to normal. (Or as normal as anyone in our family ever gets.)

Additionally, I want to thank those who took the time to write about my post immediately preceding this one, whether you commented here, privately, or on the Lead Adventure Forum.  I've always known our community is a caring one, but by your words and actions you continue to show that you are some of the best people ANYWHERE. I am humbled to be friends with so many of you, whether we have ever met face-to-face or not.You are some damn fine folks, and I am proud to know you.

Posted by Christopher Sheets at 1:04 AM