News from the Empire of the Dead: Requiem kickstarter today reveals two more models: First, the lizardlike Professor Gecko, who does not look like he's selling insurance. 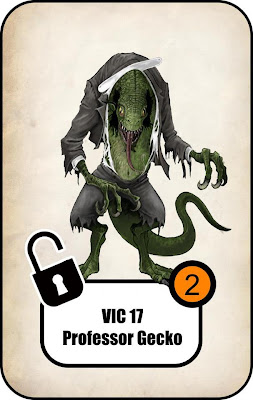 Also, the third of the Vampire Brides has been revealed in all her glory: 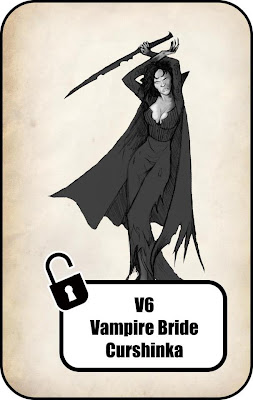 As you can see, she now has a name, not just a letter designation, as do her two sisters. Alas, neither my suggestion of Ilona nor what seemed to me to be the fan favorite, Ingrid, were chose.

I don't have updated images of the other two ladies, but I do have their names.

Additionally, there are still a few early-bird specials left. After the initial specials sold out within hours, leaving those in the Americas in the lurch, West Wind's Andy Cooper added more to the system, at both the £76 and £101 levels. Forty-four of the first remain, and 33 of the second. At present, the project's funding stands just under £38,000, with 35 days remaining.

I'm guessing I'll have to get Professor Gecko as he's a lizard, to add him to my Moreau-themed crocodilian Army of the Abandoned (a Lycaon list). Perhaps Gulth Deathroll and his fellow experimental escapees found something in the burning labs and sheds of Moreau's Northern compound before they fled, some serum that has given them infectious bites that spread their reptilian characteristics, and Professor Gecko is one such result. (Can you tell I love the fluff of a game/setting/army as much or more than the mechanics?)

Posted by Christopher Sheets at 5:12 PM

Email ThisBlogThis!Share to TwitterShare to FacebookShare to Pinterest
Labels: Army of the Abandoned, Empire of the Dead, Kickstarter, Requiem, West Wind