Penny Dreadful: the Summing Up 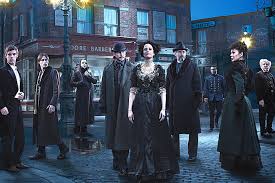 Hello me droogies, I'm back with real horrorshow content about a real horror show.

OK, I'm crap at imitating Alex's speech patterns from "A Clockwork Orange." But I do have what I hope is the final version of the Season 2 stats for the "Penny Dreadful" company for IHMN.

This is what, the fourth iteration of these stats? I think we're done tinkering until next season rolls around, when I plan to do a whole new list. I daresay our characters will be much changed and will warrant a good rethink. The producers have also said they've going to introduce another literary character to the show. I wonder who that will be. Any guesses?

The few changes I made this time are based on the finale, so while I'm not intentionally spoiling any details, I don't want to ruin the ending for anyone who's not yet seen it. Maybe steer clear until you've watched it.

I felt we had to up Brona/Lily's FV given how she tosses John around. I also armed her with the same "Terrible Blow" he has, which is equivalent to a walker's steam claw.

I also bumped Mr. Kyle's shooting value to +1 given how he came through with that little derringer in some rather adverse circumstances.

And last but not least is the Tome of the Scorpion, my name for the book Vanessa inherits from her teacher, the Cut-Wife. It's a relic, akin to the regalia Akhenaton hunts. It would make a great prize for a scenario, but it is so powerful I would severely limit its availability. As it is, I've tried to mimic its effects from the show while still making it playable.

So here are links to the PDF, one in Google Drive, and one in Dropbox.

I'll also put a copy in the Files section of the Facebook group.

That's it for now, folks. Back to the boards, and your good and faithful narrator will see you across the table soon.

Posted by Christopher Sheets at 5:59 AM