My own tormented artifact

You're all familiar with the work of Dmitri Arbacauskas, right?

If not, head over to his site at Tormented Artifacts. I'll wait.

He's a master craftsman with leather, and his sense of humor tends toward the morbid and bizarre. Check out the humorous broadsides he prints that include propaganda from the "League of Extraordinary Bastards."

Here's an example for those of you who ignored my earlier advice: 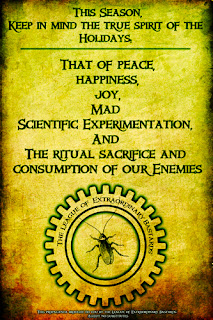 He's a Facebook friend of mine now, though ours has been a relationship confined to digital space thus far. I've been a fan of his work for a long time, but we first corresponded when he got rather, um, snarky that I, not him, won some zombie clown figures from Mad Clown Miniatures. (I think that was the contest. Right, Dmitri?) I felt so bad that I told him I'd get him to craft me the Plague Doctor mask I need later this year.

In the mode of daytime TV shows, here's one he prepared earlier:


Dmitri is at Galacticon 4 in Seattle this weekend, and look what happened. I don't think he'll mind me lifting this from his Facebook feed: 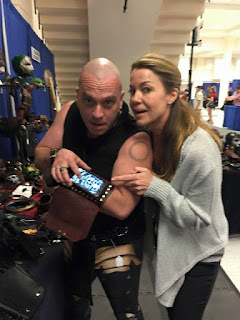 For those of you suffering head trauma, that's the gorgeous Dmitri flanked by the equally gorgeous Claudia Christian of "Babylon 5" fame. My jealousy knows no bounds. She will always be Ivanova, the right hand of vengeance, to me. God sent her.

Well, Dmitri is moving house right now and has shut down custom orders through his shop for a brief time. When he announced that, I decided to slip in under the wire and place an order for something he calls an "exorcist's hand wrap."

The one thing I asked is that, instead of the Thelemite magical symbol he showed on the catalog piece, I wanted the Yellow Sign on mine. I'm indifferent to Crowley but an ardent subject of the King in Yellow. My madness protects me.

It arrived super-quickly and, let me tell you, I was blown away. Knowing he's an honorable and upright artist, I expected the piece to be well made. What I did not predict was the superior quality of the components and the exquisite attention to detail. The photos on Dmitri's web site, though accurate, do not do this piece justice. There's no way my wonky pics are going to show you how wonderful this is, but trust me, it is great. I intend to get another one very, very soon. I'm thinking of getting the runic version of the Elder Sign on it.

I especially love that the handwrap leaves my fingers free for typing but does a great job of hiding the hideous wounds and scars that criss-cross the back of my left hand.

This is great quality leather. It smells SO GOOD. It's supple yet strong, and Dmitri's design work and edging really stand out. The hardware is of top quality. These are not the kind of notions you pick up at the corner craft store. These top-quality rivets, buckles and rings possess genuine heft and hardiness.

This is not a piece of a costume. This is an article of clothing. I've worn it every day since receiving it to get it broken in, and it already fits my hand almost exactly, curve for curve, and is nearly to the point where it seems weightless, that I don't feel it at all.

Based on this evidence, I can only say that Dmitri is a master fleshcrafter of the highest order, and I'm honored to own this product of his labor, and even more honored to call him my friend.

Thanks again, Dmitri, and you'll see another order from me cross your transom shortly.

OK, that's it for today. Back to the boards, everybody, and I'll see you across the table soon.

Posted by Christopher Sheets at 1:29 AM