Oasis in times of crisis

Hello everyone. In case you hadn't heard, my better half Tracey is back in the hospital. Her numbness and pain levels increased significantly between Saturday and Sunday, and after a disastrous visit to the ER, we finally got her transferred back up to Wellstar Kennestone into the care of her neurosurgeon Dr. Franklin Lin.
After three days of steroids and observation, it's been determined that she needs another spinal surgery, a decompression of the vertebrae at T10, T11 or T12, or possibly all three. (This is right below the site of her previous decompression, which was just over a year ago.)
So that will be Friday. We don't yet know what time. Prayers and positive energy are appreciated.
In the meantime, today I took take a little time for myself away from the demense of the hospital to visit THE GREATEST GAMING STORE IN THE UNIVERSE.
Giga-Bites Cafe in Marietta, Ga., is all that and a piña colada smoothie (which is on the menu, y'all.) The store stocks a wide selection of the latest tabletop wargames, board games and card games, as well as having a diverse menu selection at its grill.
On offer are coffees and cappuccinos, smoothies, paninis and desserts. I had the ham and Swiss panini, which includes sautéed onions and Thousand Island dressing. Very savory. I also had a homemade brownie, because stress makes me crave chocolate, but damn if the lemon blueberry scones weren't tempting.
My second favorite thing about the store is the breadth if its selection. They have minis from the largest manufacturers and from smaller boutique studios. Whether you're into sci fi, fantasy, post apocalyptic, weird war or anything in between, they've got you covered.
Today there was a lot if 40K going on, and some of the many tables showed evidence of their active Magic the Gathering community. They also have a full library of terrain for the gaming tables, representing many different landscapes.
My favorite thing about the store, though, is its staff. Owner David Finn is a superstar. Now get this: I live three hours away and visit the store once every three to sixth months, but when I walk in, he recognizes me and greets me by name. And I know the store's regulars also benefit from his warmth and generosity of spirit. All the staff shares that openness and attention to the clientele, and that are also detail- and service-oriented.
Today I was restricting myself to things that would go well with my steampunk warbands for In Her Majesty's Name and Empire of the Dead, so I only bought a couple of Micro Art Studios resin bases. Oh, I forgot to mention the swathes of goodies they have for painting, basing and terrain-making. So, they have swathes of goodies for painting, basing and terrain-making. There.
And though I was being financially disciplined, given the expenditures endemic to a prolonged hospital stay, I was severely tempted by the Killer Croc figure for Arkham City. If they'd had Harley Quinn in stock, I know I'd have broken protocol and bought her.
Sorry for the poor quality of the photos, but I was trying to be as unobtrusive as possible as people played. Also, my camera is my iPhone 4. I also apologize that they're all infodumped here at the end. Often I'll start a post in my phone and then finish it up on the laptop before publishing, but yesterday a medtech knocked over a glass of water that infiltrated our laptop's touchpad. Now the thing won't turn on at all.
The hospital is being very in touch about the situation,and I'm going to drop it off at Best Buy for an estimate tomorrow when I run home to get some fresh clothes and check on our kitty.
So back to the boards, everyone, and I'll see you across the tables soon! 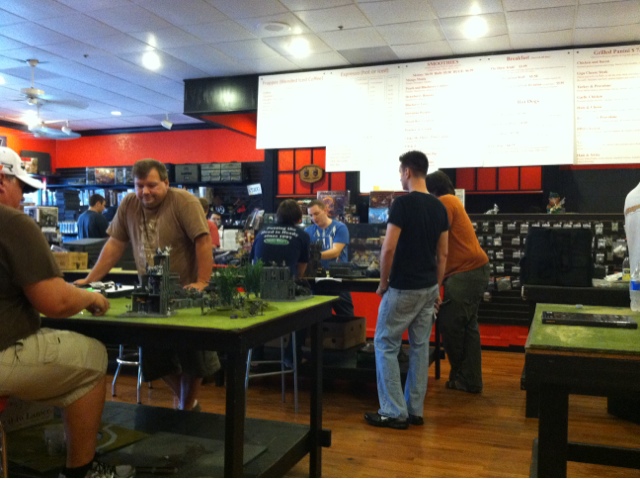 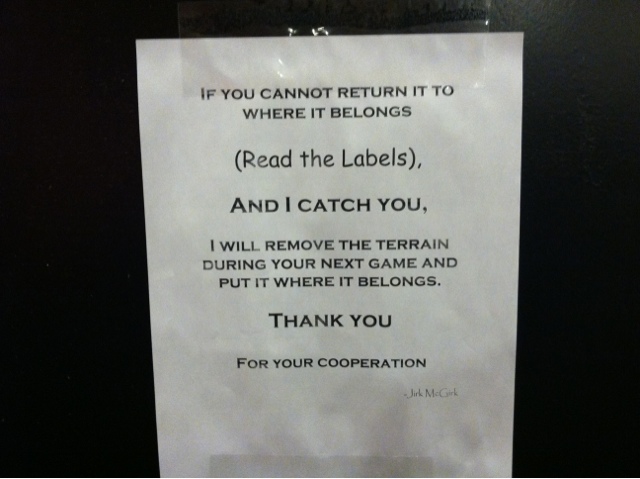 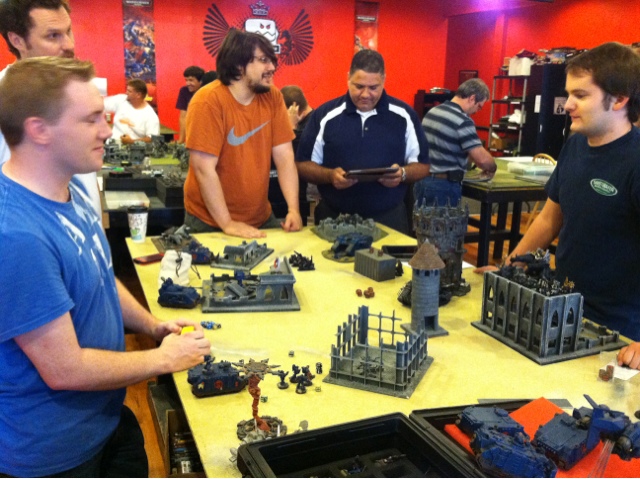 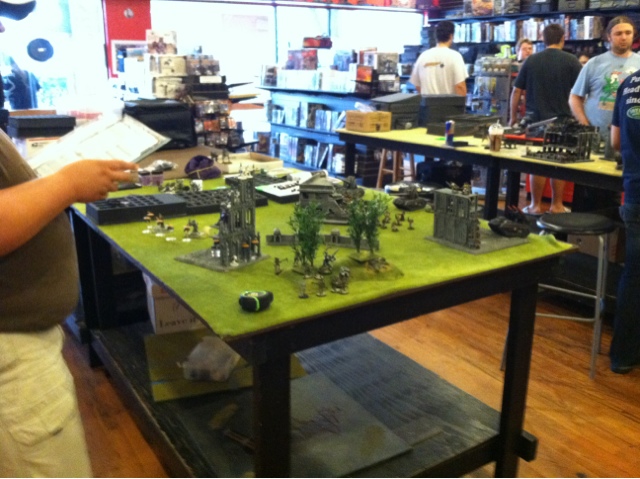 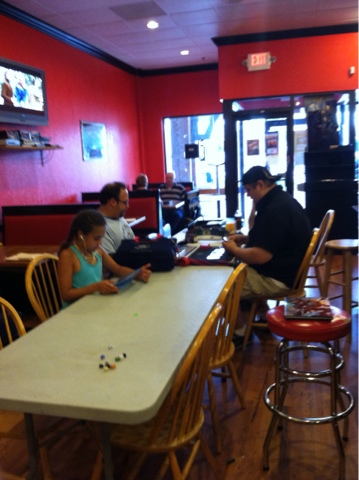 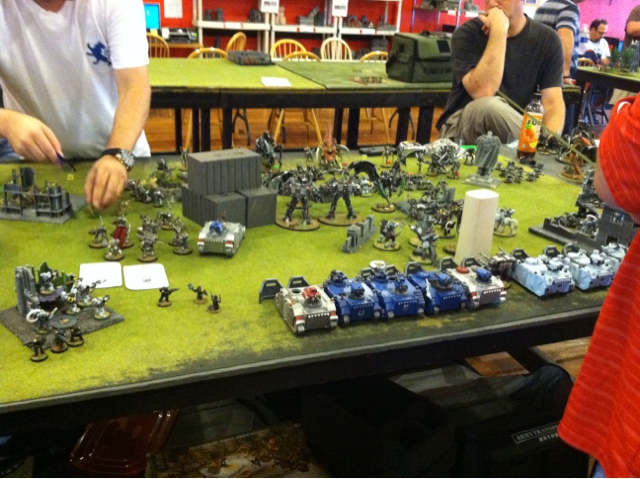 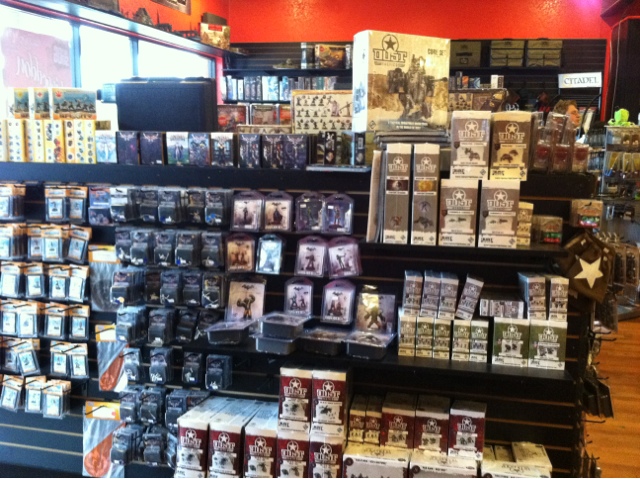 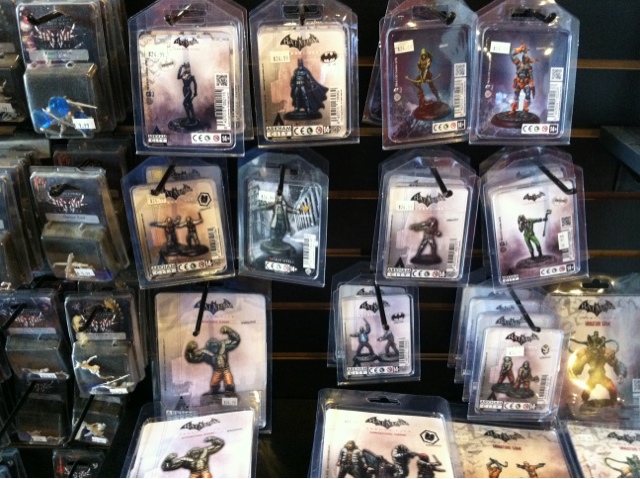 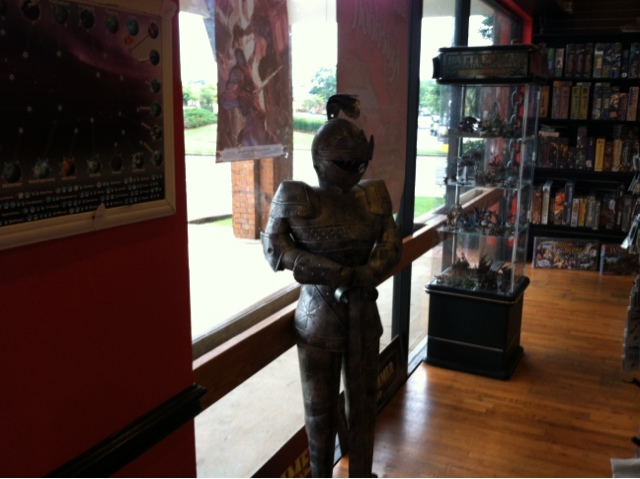 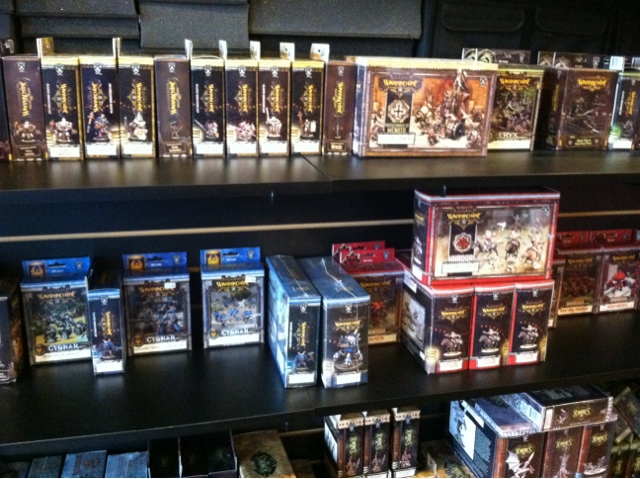 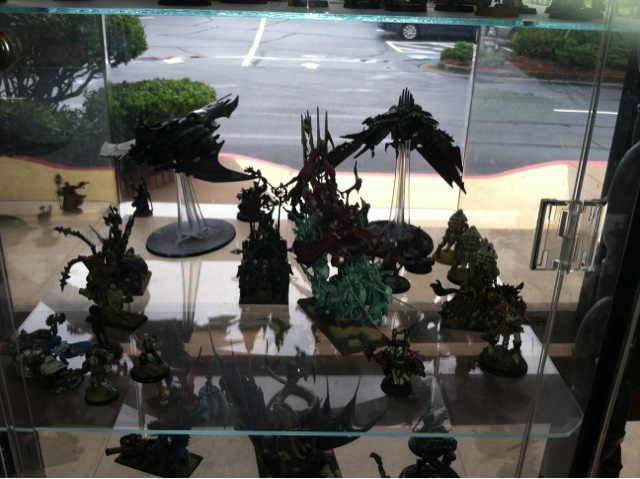 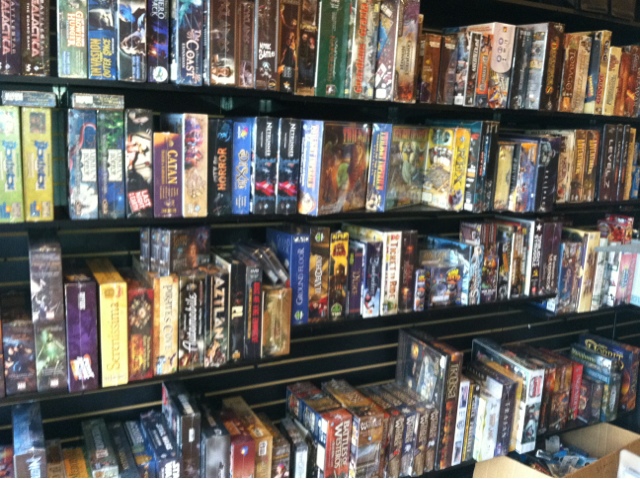 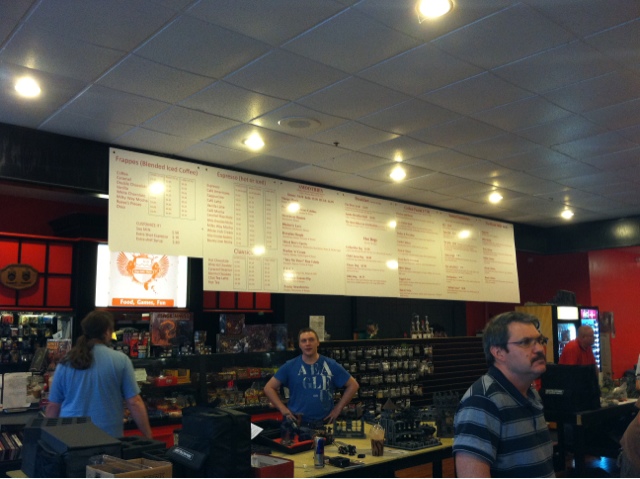 Posted by Christopher Sheets at 11:57 PM