Kickstarter rewards start rolling in, and oh, by the way, thanks everybody

First off, thank you everyone for your continued positive thoughts, prayers, and/or ritual interactions with the divinities of your choice on behalf of Tracey and me during and following her recent surgery. It was her third spinal surgery in 13 months, but she has regained her strength more quickly than ever before. What happens with her balance, sensation and pain levels remains to be seen as she continues to recover. Impatient person that she is, she wants to be all better NOW, and of course who could blame her. I have to keep reminding her, "Sweetheart, you still have your stitches in. It's early days." Her nervous system needs time to un-jangle itself.

Next, Kickstarter rewards continue to come in from projects pledged oh so long ago ...

Effigy Miniatures' Havoc Protocol line sent me the set of The Founders I pledged for. These are two ultra-upper class sci-fi civilians in their fancy duds, as well as a hovering servicebot. 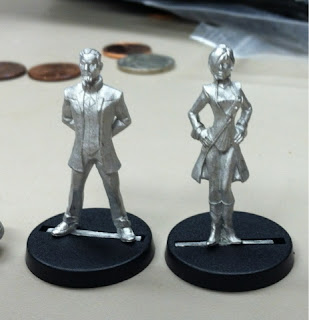 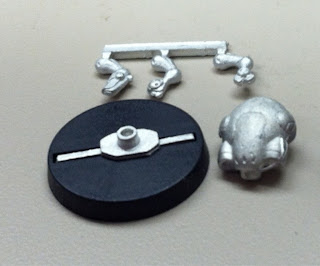 What you're not seeing in the dronebot photo is the inch-long clear acrylic rod that serves as its flight stand, because as I arranged these pieces for the photo, it made a break for freedom and plunged headlong off my desk. The carpet at work seems to have swallowed it, and of course the cleaners vacuumed later that night. So I'm going to explore alternatives there, obviously.

There are too few civilian minis about, especially for sci fi, so I pounced on these when I saw the concept art. I love them, and the execution is just as fantastic. Although I will likely be a tad more conservative, I expect to see versions of these showing up online painted like the flamboyant capital-dwellers from "The Hunger Games."

The minis seem a little taller than I expected, but they are gorgeously cast and have minimal mold lines and zero flash. (I also got a Havoc Protocol supporter's badge as part of my pledge.)

Yesterday I received my minis from Impact's Chibi Dungeon Adventurers campaign. This is one I really wish I could've gone for in a much bigger way, but the campaign closed in early November, which was during Tracey's previous hospitalization, so I had to be spare with my support. The line includes chibi (also called SD or super-deformed) versions of all the high-fantasy dungeon-crawling or -dwelling characters and critters we know and love. I started out planning to get just the classes from the old D&D cartoon -- thief, ranger, barbarian, cavalier, magician and acrobat. Then versions of Venger, Dungeon Master and the shadow demon were added, then the campaign just exploded. If there's a character type you love, or a denizen of the Monster Manual you just adore, chances are it is replicated in this line. The art style makes even menacing characters cute, and if you like the figures for Super Dungeon Explore, you owe it to yourself to check these out.

In the end, I ordered just two figures, Warrior Red -- a dual-wielding female fighter in a scale-mail bikini with wild, flowing hair -- and, of course, Cthulhu. I found when paring down, going with my and Tracey's favorite characters was likely the best bet.

The figures are made of the remarkable Trollcast material, and they have exceptional fine detail and seem significantly stronger than one would expect given the thinness of some of the weapons. They're both multipart, so all I can show you for now is them arranged all nicely together. There is some flash and only moderate mold lines. It'll be interesting to see how cleanup goes compared to previous non-metal figures I've worked on. 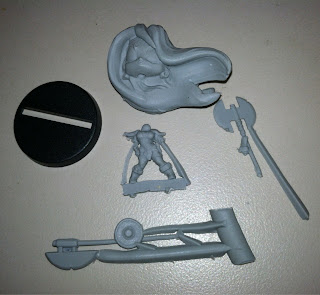 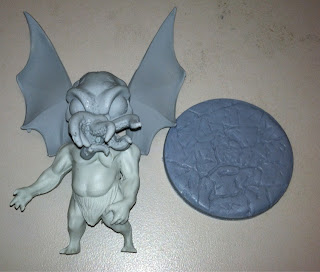 These aren't the first Trollcast figures I've acquired. That honor goes to Judge Minty, the figure from the most recent 4th Semi Annual Frothers Charity Thingy. I got him a few weeks ago (thanks Dags!) but I had neglected to post a photo. So here's two, an overexposed one against a dark background, and an insufficiently lit one against a neutral background. Maybe if you split the difference you can see enough detail to get how nifty this mini is. 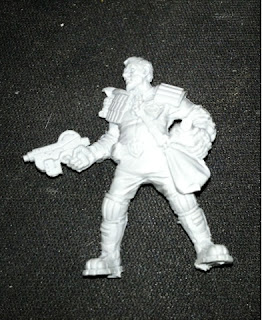 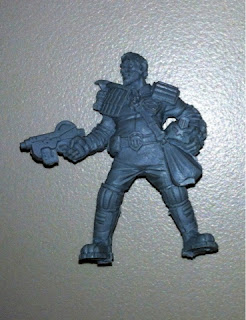 If you haven't seen the short film on YouTube, click the embedded video below and watch it. You'll thank me.


OK, that's it for today. I thought I had more but my energy seems to have fled. I'll be back in a few days to introduce you to another character who'll be populating my Victorian London for In Her Majesty's Name and Empire of the Dead. This time it will be the Mistress of Machines, Miss Rossum (I think her first name's Emmy, but I could be confusing her for the actress).


Back to the boards, everybody, and I'll see you across the tables shortly.

Posted by Christopher Sheets at 9:39 PM