Dramatis Personae for my steampunk dreams

Today I'm going to introduce you to someone very special to me. He's a character who's been banging around in my head for several years now, and I've finally given him some form and function, and he's going to be prominent in my steampunk London, the setting for the battles I shall fight using Empire of the Dead and In Her Majesty's Name rules.

Because I came to wargaming after years of being a roleplayer, I'm very much a story/fluff player. It's doubtful you'd ever see me build a beardy/killy/WAAC* list. What matters to me is the narrative. As such, I haven't written out rules/stats for this gentleman yet, as I don't really see him as a combatant, at least not at first. And if it comes to that, he has access to powers and abilities that would put a very strange spin on things, so maybe he could be drawn in as a campaign-ending big bad (or maybe a medium-sized bad).

Those of you who've been with the blog a bit over this past year have already been introduced to the Army of the Abandoned, my Moreau-inspired gatorman army I plan to run as  a werewolf list under the EOTD rules. I've also talked a little about and shown some figures I've acquired for the Ladies Auxiliary, my EOTD Gentlemen's Club analogue. Well, all these and the gentleman you're about to meet inhabit the same steampunk setting in my head, along with others to whom I hope to introduce you as we enter our second year together here at "Dispatches from the Rim." (The blog's one-year anniversary is coming up on July 8th. The forty-fifth anniversary of my birth is coming up July 15th. Huzzah to both of us!)

As is my custom, I'll introduce you to this fellow in a little piece of fiction. I call it, "The Crooked Man."

His fellow pedestrians did not look at Synryll Voolge as he walked by, though they yearned to stare at him, at the oddness of his shape, at the curious way he moved.

They did not dare, though, for it was better to burn with curiosity than be caught in Voolge's singular gaze, to be transfixed by those phosphorescent orbs staring out of a head hung too low on his chest.

It almost looked as if Voolge's head sprung from the center of his sternum, like a strange fruit dangling from the high, rigid arc of his twisted spine.

The Crooked Man, they called him, when they were sure he could not hear them.

As striking as they found his appearance, they found his movements even stranger. Voolge's steps were feather-light, his pace assured, though his deformity allowed him to look neither left nor right as he walked.

When he reached a corner, it was not as if he turned -- more like he stopped midstride and the world rotated around him. The effect was known to induce vertigo in those nearby as he angled, or was angled, to his new direction. Then, his cat-soft steps would resume, as if there had been neither change nor interruption.

Voolge made steady progress across the rain-wet cobbles towards his place of business. Its grandiloquent exterior lacked any indication of its nature, no explanatory sign indicating what goods or services one might procure within.

Had anyone had the temerity to stare as Voolge approached his customary destination, they would have witnessed the massive teak door swing open as if weightless, welcoming the master back to his mysterious domain. And they would have seen Voolge swept quickly inside, as if boosted by a sudden gust of wind, though the clockwork regularity of his footsteps never altered.

The massive black door. The fluted columns along the colonnade. The gargoyles and grotesques atop the roofline. Many paused and wondered what secrets or riches might be hid within. Only those who received the personal invitation of the Crooked Man knew for sure.

At night they could be seen, some coming boldly, others furtively, but always eagerly, to the sumptuous façade in Pangborn Lane. Each visitor, whether clad in the finest bespoke fashions or wrapped in crudest rags, presented the gilt-edged calling card pressed into his or her hand by the Crooked Man.

And below, centered in heavy Roman letters, the hidden name, the secret name, the mystery to be plumbed:


That, my friends, is Synryll Voolge, the Crooked Man, master and curator of The Obscenarium. What bacchanalian delights await within his demesne? What depraved pursuits are there conducted? And how does a man so crippled by nature move in a way at odds with all of physics and physicians?

These questions and more will be answered as I reveal, person by person, group by group, perhaps building by building and street by street that which makes up this area I intend my tiny painted minions to fight and die over. Let me drop a few more phrases that are scratching at the inside of my skull: The Stitcher Cult. The Scarlet Sisterhood. The Shattered Saint. The War for the Sewers. Cuthbert, Dibble & Grubb, Solicitors. "The halls! They move!" And The Strange Case of the Basement of the Palladium.

For those who are curious, or who suspect as much, Synryll Voolge is in part based on/inspired by Leonard Trask, who was called "the Wonderful Invalid." His spinal curvature is much more severe than I imagine Synryll's to be, but of course Trask's was exacerbated by physical accidents such as falling from a horse. Here's the first paragraph from the Wikipedia entry I just linked to: 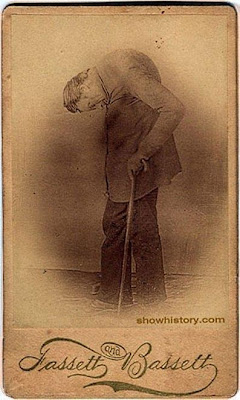 Leonard Trask (June 30, 1805 – April 13, 1861)[1][2] was an American who suffered from a "contortion of neck and spine" during his late 20s after an accident while horse riding, which led to Trask becoming a medical curiosity. After numerous attempts at a cure, several further accidents resulting from his condition, and a loss of employment and mobility, Trask (by then earning small amounts of money as a curiosity) published an account of his condition which further increased his renown. His condition remained unsolved upon his death, but he was subsequently diagnosed post mortem with ankylosing spondylitis (AS).[1][3]

I discovered him while researching ankylosing spondylitis, the genetic disorder from which my wife suffers. And suffers is definitely the right word. And the distress this causes the spine brings on a host of other problems, including spinal stenosis. In some ways, Synryll is an acknowledgement of her condition, and his pursuits are an acknowledgement that, if my wife were not slowed by her condition, she would've taken over the world already like the evil mastermind she is. (Tracey, you know it's true. And I will always be your most loyal minon!) That Voolge can move and do all the things he does are an indication that he has access to resources beyond the ken of good, decent folk.

Well, thanks everyone, and I promise more to come soon. These people (and creatures, and places, and things) are crowding my brain and I've got to get them out. And you're all in the line of fire!

Back to the boards, everyone, and I'll see you across the table.

Posted by Christopher Sheets at 1:22 AM

Email ThisBlogThis!Share to TwitterShare to FacebookShare to Pinterest
Labels: ankylosing spondylitis, Army of the Abandoned, Empire of the Dead, In Her Majesty's Name, spine, steampunk, Tracey