'Cause it's the THRILLER, thriller night! (That song's been running through my head since I went to my P.O. Box.)

Zombicide is here! One of the many advantages, I guess, of living so close to Atlanta means that my copy of Zombicide from Guillotine Games and Cool Mini or Not arrived in my mailbox the same day I got the email notifying me it had shipped.

Here are my unboxing photos of the Abomination level package. (Some of the items won't ship until next year, and the T-shirts were hung up in customs so will ship after Gencon.)

Here are the three special characters. Zombified versions will ship in the second quarter of 2013. 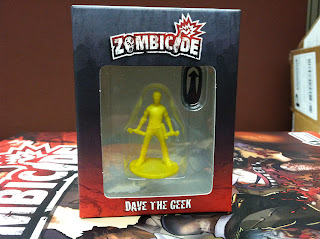 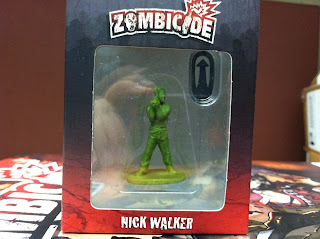 Sorry for the reflection of my hand! 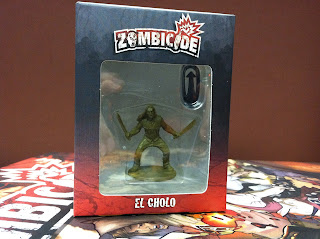 Note the plastic slider for the character cards in each of the boxes.

And here are those character cards. 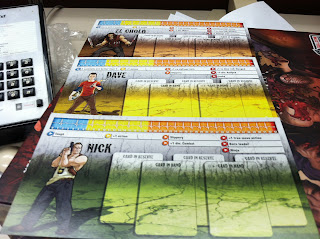 Here's the signed lithograph of the box cover art, suitable for framing: 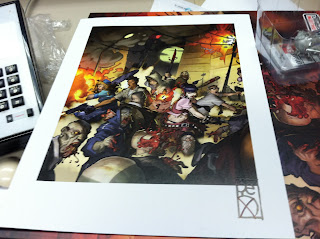 Here are the extra walkers, fatties and runners from the Kickstarter stretch goals: 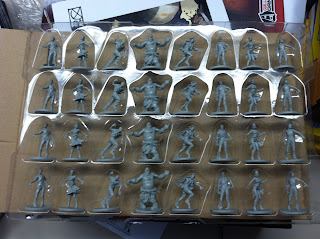 Here are extra Walk of the Dead alert mini-cards, and they are hiding the extra Abomination:

Dice! Read pips on both black and glow-in-the-dark: 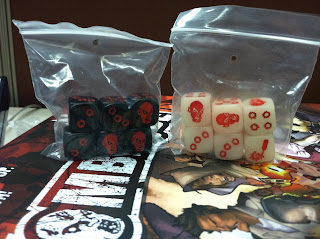 Now the actual box set itself. This is what people who didn't join in on the Kickstarter will get when they purchase the game:

Let me say this box is strong. I don't know what's woven into this box, but I'd hate to be hit with one and, in an emergency, you could probably chock your car tires with it on a hill in an emergency.

The tiles and tokens below seem to be made out of the same material. They're going to be durable and hold up very well to the rigors of play. 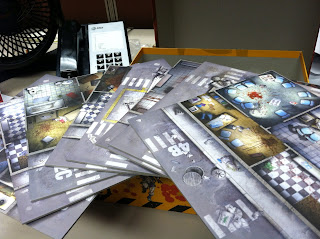 These sheets are thicker than a U.S. quarter and feel stronger than flat-pack furniture. Great job, CMON! 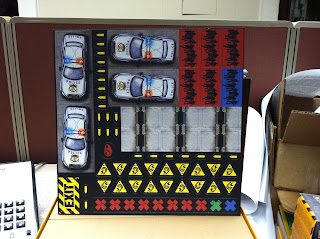 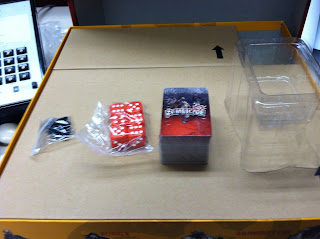 The survivors (and the Abomination): 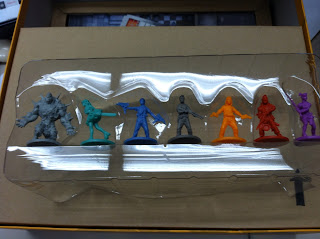 And all that zombie goodness!: 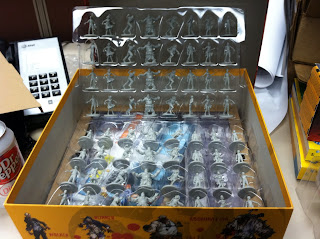 Here's a close-up from one of the trays (a runner, a fatty and a female): 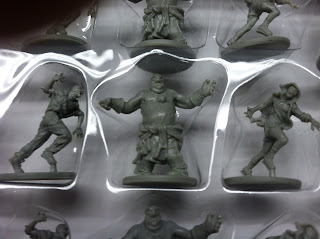 For any of you who were worried about the strength of the plastic in which these things are molded, all I can say are allay those fears. This is not the bendy plastic we've seen before. It's stronger than Clix, it's stronger than the figures in Flying Frog's Last Night on Earth or A Touch of Evil. It's good stuff. I've only made a cursory examination of the individual figures, but there's been no flash and, while there could be mold lines somewhere on some of them, I haven't found any yet.

This is even better than I expected when I supported their Kickstarter. And there's still more goodness to come with the other extra characters I bought. Like the zombie virus itself, Zombicide is the gift that keeps on giving.

I can't wait to see how these paint up!

Posted by Christopher Sheets at 11:13 PM