I cannot believe it. Hendybadger's Create a Supreme Contest ended last week, and the winners were announced today. 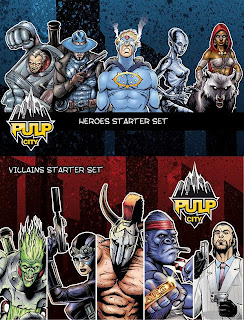 The top winner was ... me! I'd entered a low-powered reluctant hero who's been stirring around in my cranium for a number of years, and the Pulp City-focused contest Ian ran was just the impetus I needed to get him out of my head and down on paper.

(Warning: The Pulp City link above plays music. The shut-off is at the top right of the screen, if you're viewing this from work or, like me, are listening to something else as you surf the Web.)

Here's the link to the announcement in Tales of a Tabletop Skirmisher. I love it that Ian wrote up a combat between my hero, F.K., and Terminal Velocity, the character created by proditor.

Proditor won a colletion of 12 Reaper Chronoscope minis, and I won the hero and villain starter sets for Pulp City, plus two individual characters, Kitty Cheshire and Chimp Chi.


The quality of the entries was very high, and I was surprised to win the judges' decision because F.K. isn't a flashy, high-flying star-spangled hero. Of course, that's what I like about him -- he's a young guy dealing with powers he neither expected nor wanted and the side-effects of which have made him an outcast most of his life. But now he's coming into his own, I think, and the impetus of this contest win is pushing me to get some of his experiences down in writing.


Here's something else that helped inspire parts of F.K.'s creation:
Top Gear's Richard Hammond sitting on a Tesla coil while encased
in a Voltrex suit, directing bolts of lightning with his hands.

As I told Ian in a private message I sent him, I've always been a writer, but by vocation I'm a journalist. I've always wanted to turn my hand to fiction, but I've been tentative about it. I've written poetry and plays and RPGs, but never narrative fiction.

So don't be surprised now when I foist my handiwork on you. And feedback is most welcome! My followers and readers on this blog are people whose work I myself admire, and I'd love to hear what you think once I get some fiction up here. I'll try and create a separate page for it so I won't clog up the blogging lanes if you're just here for gaming and the like.

Be safe, everybody.
Posted by Christopher Sheets at 12:07 AM