The rest of "Sedition Wars: The Battle of Alabaster" -- Unboxing (pic heavy)

Thanks for sticking with me during this period of infrequent postings. As summer yields to autumn, I feel more centered, empowered and inspired. I think that bodes well for "Dispatches" and for my hobby activities in general.

I don't want to veer too far from my topic tonight, but I do want to say Tracey and I have had some wonderful times recently. After a recent visit to the pain clinic, she felt good enough to actually go out to a restaurant for a meal. We went to the IHOP near our house, where she hasn't been in at least a year. The manager and staff always ask after her when I go in to pick up food for us, but her return there caused quite a scene. All the servers who know us came over for hugs, and Pam, the manager, actually cried. Which made me tear up. Nothing adds to the flavor of stuffed French toast with blueberries like fresh man-tears.

And there's nothing to make you feel like a success as a man, a husband, as a human being, for your beautiful wife to be looking into your eyes and tell you, "You are a good man." Wow.

Now, on to the unboxing:

So here's the tidy little box these wave 2 minis came in. While many people are unhappy with the material the Sedition Wars minis are made of, I think Brian Roe wrote a nice analysis of the materials. You can read what Roebeast had to say here and here.

Essentially, it takes paint well but moldlines are maddening and difficult to deal with. I'm going to keep that in mind as I work on them.

There's also a growing thread on Frothers about the slight stature and apparent shrinkage in scale of some of the plastic minis. The multitude of voices there will give you a better perspective on this issue than I can at this stage (although I certainly reserve the right to chime in later.)

On the non-minis front, this wave included cards and the instructional painting DVD: 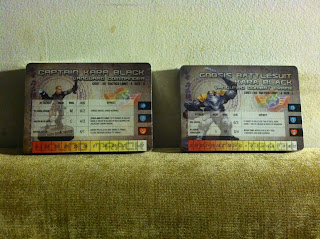 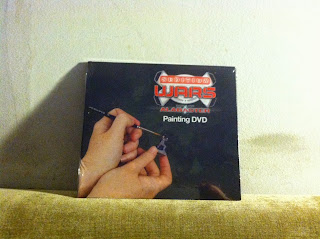 The remainder of the Biohazard product comes in one big blister pack. 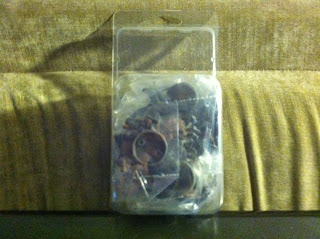 The terrain pack comes in its own separate retail-ready box. It's nice to have the diagram on back detailing its contents. (That's one complaint I do have about a lot of kickstarters: no packing slip in the box. I want to be able to quickly verify that what you think you sent me is what you really sent me, and that that matches up with what I requested.) 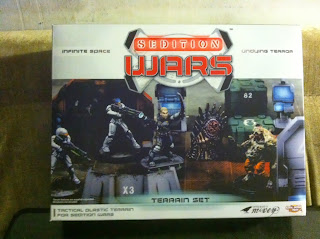 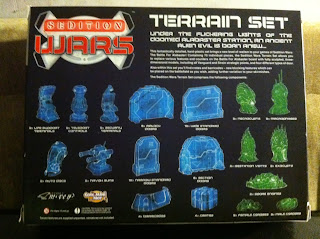 So here's the terrain:


And all the add-ons come in their own little bags to keep their myriad parts together. That's another thing about these Sedition Wars minis -- it seems like everything is multipart. It's like buying from IKEA, in that I don't care if it's a flyswatter, if you buy it from IKEA it's gonna come in two parts with an Allen wrench.*

Once I get these minis unbagged and separated out, I'll get you better, clearer photos, and hopefully some size comparisons to other minis as well. I can't really work on them at the moment without the real risk that the tiny parts will vanish forever.

So that's it for today. The Empire of the Dead: Requiem level I pledged at should hopefully be shipped in a week or so, and the Zombicide Season Two and Toxic City Mall expansion should also ship soon. So more on those later.

Back to the boards, everyone, and I'll see you across the gaming table soon!

*I'm sorry that I can't remeber what comedian said this originally. I'd love to credit him or her.

Posted by Christopher Sheets at 11:03 AM