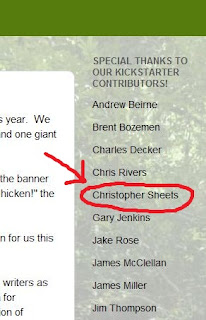 This is silly, but seeing my name in print always makes me giddy. It's probably due to the fact that I work at a daily newspaper and write headlines all night long, but my name never appears in print. (I have written a smattering of pieces for the paper over the years, but it's been rare.)

So when I saw the list of Kickstarter supporters on ArmchairGeneral's Aliens vs. Hillbillies blog, I was delighted to see my name. Robert's game "It Came From Beyond the Still" is one of my new obsessions, and I'll be writing on it at length later. If you like humorous games, hillbillies, aliens, greys, blobs, Men in Black or moonshine, this is the game for you.

I was glad to be able to help support the Kickstarter for the ICFBTS factions, and when the minis from the second book, "Something's in the Sauce" come round, I'll support that one too.
Posted by Christopher Sheets at 5:28 PM

Email ThisBlogThis!Share to TwitterShare to FacebookShare to Pinterest
Labels: It Came From Beyond The Still, Kickstarter