My alter ego joins the fray in IHMN


First I saw that Craig and Charles had period alter egos, and then, somewhere along the way, Craig published their stats. (This was over on the Lead Adventure Forum.)

Then, in a series of exchanges, Craig addressed me as both Sir and Captain, even giving me the nickname "Jackanapes."

A character began taking shape in my head. One who is pretty much me, or the me I'd be in my Brass & Blood setting.

This creative cogitation also led to the birth of a singular vehicle that is a character and a setting in its own right.

Thus I present to you, me. Sort-of me. Steampunk me, I suppose.

The Fretful Porpentine is the first aethercarrier, a gargantuan experimental airbase on a flying platform held aloft by a combination of multiple dirigibles, rampant steamtech, cutting-edge Tesla-based arc technology, Martian lighter-than-air materials and, if rumors are to be believed, some few necessary forms of ritual magick.

In addition to its methods of staying aloft and navigating the skies, the Porpentine has mounted beneath it two cyclopean temporal drive screws, allowing it to alter its position relative to the current history or timeline dominant in the realspace around it. Members of the Watch report that the Porpentine has long been circling above London and is chronally anchored in or around the year 1898.

It is unknown who commissioned the Porpentine, or when. Its current captain, Sir Christopher Leopold* "Jackanapes" Sheets, is mum on the subject.

While he continues to answer to the title of captain, Sheets has, since seeing the premiere of Gilbert and Sullivan's comic opera "The Mikado" in 1885, taken to signing official documents and communiques with the title "Lord High Everything Else."

While Sheets is the source of the neologism "aethercarrier" to describe the Porpentine, he has expressed regret that the description "quadrigible," which he also coined, never became part of the common parlance.

To comprehend the true size of the Porpentine, consider this: Sheets has boasted that he commands the only known craft that has its own horizon.

The Fretful Porpentine began as a simple refit-and-repair dock for the various airship crews lucky enough to learn of its existence. The cantina aboard became a popular feature with aircrews and sky pirates, who then let valuable secrets, information and rumors flow out as the rum flowed in.

The cantina does have a name, though few know or notice it. There are no signs on the building’s exterior. Inside, a small plaque is screwed to a supporting post over near the kitchen. It bears the single sentence, “You Meet in a Tavern.”

Since its early days, the Porpentine's features and fittings have grown into a worthy port of call, boasting all the functions of a small town. It provides neutral ground for those visiting it, and it is not uncommon to see sworn enemies drinking and singing together within the confines of the cantina.

Sheets says his hardest task is finding a suitable command crew, as the unique systems of the Porpentine require, at a minimum, a set of psychically linked quadruplets to handle her navigational demands and a chief engineer capable of repairing technologies not yet invented.

Sheets claims, by training and heritage, to be an initiate of several mystical and priestly orders. He is, at least, a veteran of several esoteric encounters aboard the Porpentine, though whether his success has been due to some praeternatural skill or sheer luck is a matter of some debate.

* It should be noted that Sheets' middle name is in a constant state of flux. Usually he reports it as Lee, but it has also been recorded as Leopold, Leonidas, Llewellyn, Ludwig, Lehrer, Latson, Lane, Laurent, Lake, LeFebvre, Loeb, Lyzbet, Lechkov and once, unbelievably, Lickspittle.

I find it a measure of my vanity that the character based on me costs as much as Craig and Charles' characters put together. In my defense, those gentlemen have actual experience with weapons and can shoot and fight just as well as their stats say. I can also shoot and fight just as well as these stats indicate, which is not at all. Thus all the skills designed to keep him alive!

I've already found a miniature to represent the good captain. 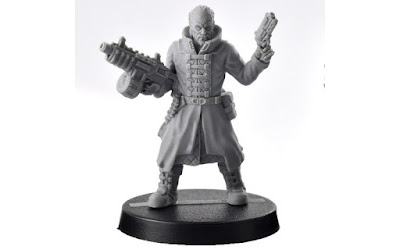 It's Isaias Cortez from Anvil Industries, and he's part of their sci-fi Afterlife line. A few modifications ("stick some gears on it") and it'll be right as rain. That ocular implant around his left eye is going to become an eyepatch (the good captain's monocular targeting array sits in his eye socket, under his patch, which he flips up when he's in combat. It's been linked directly to his optic nerve through a horrible surgical process which he prefers not to discuss, thank you very much.)

Some of this figure's cybertech on the back of his head will get smoothed or painted over. And that big gun in his right hand is going to become a just-for-looks grappling gun. Or maybe not just for looks. Of course, new gear would alter the good captain's cost. Hmmmm. Are there rules in IHMN for grappling guns? We did hash out those net gun rules that Craig said he'd likely put into Gothic ...

Anyway, that coat, the boots, the beard -- they're exactly the look I was hoping for.

I'll be mining this rich vein for a while, although I've left details of what's on the Porpentine intentionally vague so others may develop it as they wish. I've done some preliminary work on the command crew, but they've got to percolate for a few more weeks at least before I share them.

Next up is most likely the Plague Doctor, like I promised last time, The good news is that he's gained a couple of ancillary characters, so I may be writing up a whole Plague Doctor crew.

Copies of the character document, with a proper grid for stats and without all the introductory and concludary hoo-haa, are available on Google Docs or on Dropbox.

Posted by Christopher Sheets at 1:11 AM

Email ThisBlogThis!Share to TwitterShare to FacebookShare to Pinterest
Labels: Brass and Blood, Fretful Porpentine, In Her Majesty's Name