And they've landed directly on my heart!

First let me apologize for the poor quality of these photographs. They're taken in low light with my camera phone and flash. I honestly tried my best, folks, but they're still kinda unfocused.

I love these minis, the product of Patrick Keith's recent kickstarter. He's brought many bodacious babes from a variety of iconic genre roles to life. I only regret that I wasn't able to support more and bring more of these babes home. As I said in a response on Facebook, these make me want to kiss Patrick square on the mouth. These are great castings with only a tiny bit of flash and almost no mold lines. I mean, you could clean them up with an X-ACTO and maybe one file. Or maybe just a fingernail. Super job. I am delighted with the execution and the quality.


One great part of this kickstarter was, as a stretch goal, was Patrick including what he called "Relics" choices -- miniatures he created a while back that were no longer in circulation. Included in this is my beloved Trixie the Recovery Agent, who is now available again from Ed at Two-Hour Wargames. It also includes his version of Deja Thoris, as well as Terri the Steampunk Cowgirl and a generic fantasy babe using two swords whose name I do not know. The babe, not the swords. Well, I don't know their names either, if they have names. Anyhoo ... 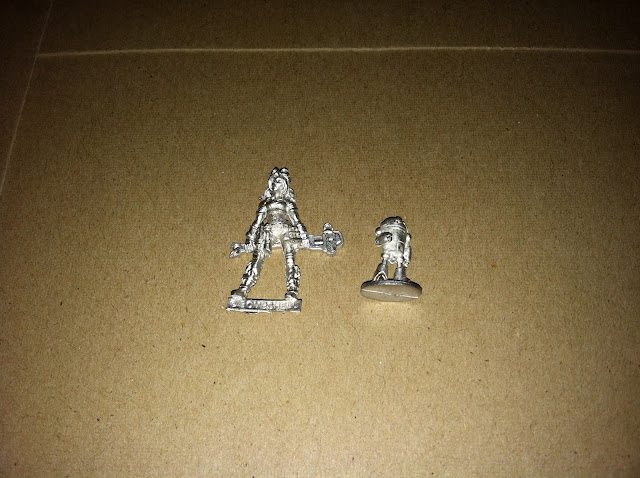 Above you see the Kickstarter Exclusive Babe Maelee the Mechanic and her HLpR bot.

I supported at a level entitling me to three Babes choices (plus Maelee plus stretch goals). I also turned in my T-shirt (my massive size wasn't available anyway) to get two more. 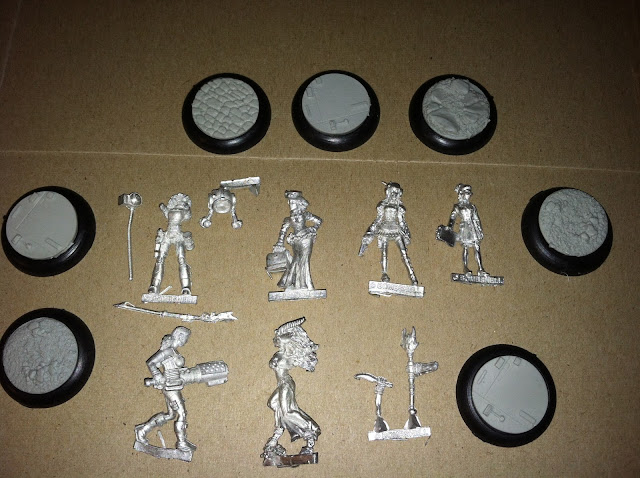 Here you see my actual Babes choices, plus the one Patrick gave us all for free as the campaign continued from success to success. Top row from left, Vivian Gale the nautical engineer, Victoriana the Steampunk Medic, Raven Skye the Airship Pirate, Dr. Helen Salinger (the freebie). Bottom row from left: Matt Dixon's Bug Spray and Delzira the Demon Princess. The bases surrounding the minis include the custom resin inserts that were provided as part of the crowdsourcing campaign.

As with most kickstarters, there were also add-on options for additional amounts, and I plumped for two of them. Professor Karrick (a steampunk of the first order) and Thulle (who is a tentacly, bug-eyed monster) and Luta and Shunkaha, a female Native American shaman and a werewolf (or perhaps a Skinwalker, although I find that less likely. Plus he's got a great feathered TOP HAT.)

Posted by Christopher Sheets at 11:25 PM

Email ThisBlogThis!Share to TwitterShare to FacebookShare to Pinterest
Labels: Bombshell Miniatures, Empire of the Dead, Kickstarter