I've really got to get it under control. Shiny, shiny! I want to support ALL the great miniature company Kickstarter and Indiegogo projects I see going on right now. But I'm not made of money. On the contrary, I'm made of old receipts, ticket stubs and dust.

I showed the unboxing for Zombicide, which was the first Kickstarter I got behind in a big way, but not the first one I contributed to. I first kicked in support for It Came From Beyond the Still, also known as Aliens vs. Hillbillies. I'll show some of my models for that later on,

What I want to share with you today is the result of what support I could put behind a project from Impact, called Little Urban Achievers. My rewards arrived today, and they look fantastic. The goal of this project was to produce minis with the look of the cast of a certain film involving bowling, carpet, and a Dude who Abides. I didn't have much spare cash as the funding period wrapped up, but I did have about $20, so I scored three figures from the initial run. I chose El Duderino, The Vet(eran) and Chino. Impact already had the Valkyrie figure available, so I figured I could grab her any time.

What you see behind the figures (and underneath them) was my other acquisition today, the limited edition strategy guide for Capcom's Resident Evil 6. I'm getting the game for Christmas, but I'm a patch collector, so I wasn't going to let these get away from me. I already had one of the BSAA patches you see behind Chino there, since it was included with the limited edition copies of the Resident Evil 5 game. But the other two are new. When I say I collect patches, let me be more specific. I collect patches of fictional groups or organizations and imaginary events. I have the patches for some of the Clans from Battletech, the factions in
Warmachine and Hordes from Privateer Press, one from the Miskatonic University 1930-1931 Antarctic Expedition detailed in Lovecraft's "At the Mountains of Madness," by Propnomicon, who is a propmaking mastermind and artisan without equal, the Ishimura Planet-Cracker patch from the original Dead Space video game, several more. I haven't added any of patches for units from the Infinity game yet, but I'm sure I'll get some in time as I get more into that game. I read "Campaign: Paradiso" over my vacation and really enjoyed it. The writing was top-notch, the production values are off the chain, and the painting and art are breathtaking. Love, love, love it.

Enough rambling. So here's the other two patches, along with the BSAA one: 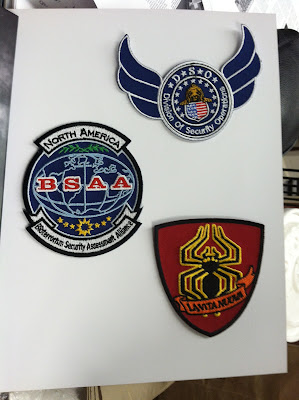 One cool thing of which I was unaware was that the strategy guide's cover is the box art for the Japanese release of the game. The U.S. edition just has that funky giraffe-looking weblike No. 6 on it. 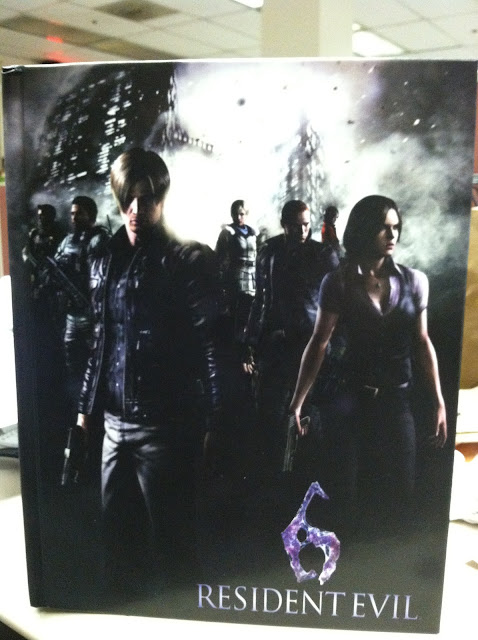 Has me all excited! I hope all my friends and readers in the States enjoy their Thanksgiving, however they get to spend it. And I hope all my readers and friends elsewhere enjoy the next few days as well. I've got to come into work on the infamous "Black Friday" this year, but I'm actually off on Thanksgiving Day, which hasn't happened in a while. Not sure yet what Tracey and I are doing.

Check back in a few days and I'll give you a rundown of the kickstarter and indiegogo projects I am backing and the ones I wish I was backing.

Oh, and I think I disabled the Captcha on the comments, at least I tried to, but who knows?!? Somebody try it and tell me how it goes. I really want people to feel free to comment, and I'd rather spend my time deleting spam than hearing only the sound of crickets because I've made it difficult.

Thanks, everybody, for stopping by and spending this bit of time with me. You, my friends, and this hobby we share (these hobbies, more like, for which of us is ONLY a wargamer) are some of the things for which I am truly thankful this year.

Cheers!
Posted by Christopher Sheets at 12:35 AM