Down to the wire for Effigy's Kickstarter

There's less than two hours left in Effigy Miniature's kickstarter for their Havoc Protocol miniature line. While the line is an anime-influenced set of both male and female sci-fi troopers, there are other add-ons available, like their earlier specialists and the aristocratic civilians called the Founders. That's what I'm in it for. Here's the concept art for the Founders, by Aaron Minier. 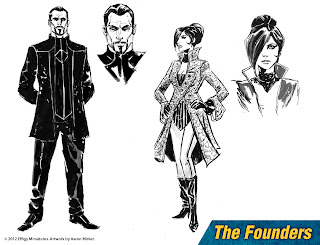 The line is around $225 from its funding goal. If you're interested at all, now is the time to make sure Effigy can bring this great line to fruition! Thanks for taking the time to read this and take a look at Effigy's great effort.
Posted by Christopher Sheets at 7:55 PM